A Fragment of Damnation 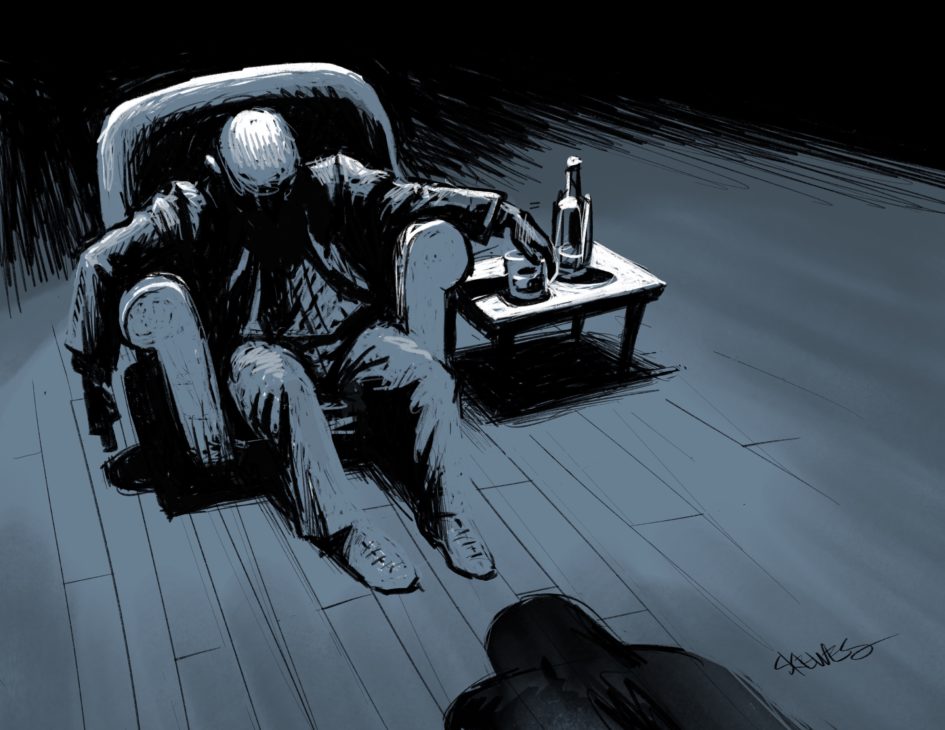 He ran.  He didn’t know where he ran.  It was all lights and streets and his fear chasing him, finally chasing him.  He finally gained enough control to remember a house near where he was, where he could go, where he could hide.  Come on, he said to himself, you don’t hide!  And even then, he couldn’t face that truth about himself.  He believed the lie.  There was no lie.  He wasn’t hiding.  He slammed his car into gear and sped down quiet streets.

She dumped the canvas bag on the road, and scanned around her carefully.  The avenue was empty and silent, a small relief.  The bag was damnably heavy as she dragged it, and the sound it made seemed to echo harshly from the walls, but this wasn’t a neighborhood that worried about such things.

She knew things.  She knew where he’d go.  When she saw his car parked raggedly outside the house, one wheel up on the footpath, she went, Ah.

Street lights streamed sharp beams through the windows, cutting deep shadows in the house.  The interior was bare except for a long leather lounge, cracked and old.  Harry slumped on it, sixties, overweight, disheveled, tired, haunted Harry.  An empty glass, next to a bottle of bourbon, mostly empty, sat on the coffee table. A pistol in his hand, dangling off the arm of the lounge.  He lifted his arm, looked at the weapon for a moment, then put it down beside him, picked up the glass and the bottle, poured two fingers of amber, and sipped it.

The room was practically all shadows, still and dark.  He thought he was alone.  Then one of the shadows changed shape, and someone else was suddenly there.

Harry didn’t notice at first.  The gun slipped off the lounge to the floor as he stared downward, at nothing, at everything.  Then he tilted the glass right up, and saw.

“You took your time.”

Harry frowned.  “Didn’t think they’d send a girl.  Who are you?”

“Doesn’t matter. Been watching you and your sad, sad drinking.”

“You been here that long, I should be dead by now, I think.  Stupid of you that I’m not.”

She moved slowly into the light, and he could see her now: late twenties or early thirties, quite pretty, yet the deeper scars showed around her eyes, long pain, dressed in the color of shadows, her own pistol in her hand.  Even as she moved, the word ‘still’ came to mind, she was so calm and focused.  Familiar, familiar…

Memory.  Memories.  Sharp.  Sharp and cruel.  A little girl, who laughed and thought he was funny, then later didn’t think he was funny at all.  An awkward teen in a background.  A wedding her father felt obliged to invite him to, her eye cold.  Standing before her broken man, blazing…

He recoiled from the memories. No.  Not that.  Not now.

“I remember when you were a little kid. How can you do this?  I’m a friend of your father’s.”  A shard of light flickered in her eye, reflecting huge anger under tight control.  This was someone new, someone he’d never met.  Darkness’s agent.  He knew he was in real trouble.

“You broke my father. You had my husband beaten. I don’t know how many friends you’ve hurt, even killed. How could I not do this?”  She slowly moved from one foot to the other, watching, thinking.

She smiled slightly, lopsided and derisive. “Oh Harry, you haven’t even started.”

“Not a word.”  But Lola watched him closely now. Was his hand shaking?

“Look at you. You ran this town. You had men killed. You had Town Hall in your pocket. Look at you.”

“Go to Hell.”  He started to pour a little more liquor in the glass.

“Oh, not me. Think of all the things you’ve done in this town.”  The bottle rattled on the glass.  “Bit late for a conscience, isn’t it?”

“Don’t know what you mean,” stiff and standoffish, a man practicing his defense.

This shook Harry, and he looked at her, wary, fearful, trying to pierce the light and shadow on her face, to see who she really was now.

Her tone was conversational.  “Yeah, pretty bad, I hear. Beaten all to hell, then shot.”

“Shut up! He wouldn’t listen!  He had to do things his way, attract the cops’ attention! I had to stop him!”

“But it didn’t turn out so simple, did it, Harry?”

“Corbey’s death was the last straw.

“You could have stopped sooner.”

A sigh, almost a sob, still whispering.  “I wish to God I had.”  He struggled to breathe for a moment, tried to lift his voice out of pity into reason.  “It hit me. Out of nowhere. What I did.  When I was eight or ten, I watched someone beat my Dad. There was blood. There was breaking sounds. I thought the guy that did that was evil. I had nightmares, nightmares I’d forgotten, until I watched them beat Corbey. Then it came back. And I was the evil guy. Before I even realized it, I had my gun up and shot him. I wanted it to stop. The guys looked at me, they think I’ve gone soft. So I yelled at them –””You threatened them, Harry,” Lola interrupted.  “They didn’t like it.  They were unhappy.”

“Couldn’t do it yourself?”, her tone light and mocking.

“Shut up. No… I couldn’t. Not touch him like that. But I dumped him, where no one will find him.”  He drew a deep, ragged breath.  “People used to say, ‘your past will catch up with you’. Just never thought… no.  Not yet.”

She glanced at his pistol on the floor.

“What?” His tone evasive.

“Couldn’t pull that trigger one last time, when you held it to your head.”  She glared down at him and sneered, “You coward.”

He lifted his head, and his tone shifted from self pity to desperation.

Lola took a few steps towards him, and leveled the pistol.

“Want someone else to do it?”

He couldn’t speak.  His face was a mixture of fear and pleading.  Lola lowered the pistol, smiled.

He snarled hoarsely at her, “You want to!”

“Of course, but… there’s always a better way,” her smile almost feral.

His tone almost pleading now.  “I have money.”

“Not enough, not near enough.”

“A head start, then.”  He sat on the edge of the lounge, as if he was about to slide off and kneel at her feet.  “By the time the cops figure out it was me, I’ll be in the wind.”

“Your problem, Harry, is you never got with the times.  And unhappy people tell me things.  I’m easy to talk to, you know that.  And you never got that this is the twenty first century. You can be traced, so easy. They know it was you now.”  She leaned forward slightly.  “I followed you to where you dumped Corbey’s body. It’s in the trunk of your car. I turned his phone back on. GPS technology is a wonderful thing.”

And now, in the distance, sirens.

“Oh, Harry!  Modern times, Harry. Better get used to them. You have so much to learn… inside.”

The sirens, getting closer.

She swiftly crossed the room and left through the back, just another shadow.  Harry sat there, paralyzed with fear.  He suddenly realized death was a long way away now, and it would be a future of pain and humiliation. The click of the back door as she left was final.

There was harsh, loud, crashing pounding on the door, echoing through the house, again and again, forever.

Outside, she could see the streaks of light cutting through the faint mist as they pulled up outside the house.  Good.  Overdue.

She had a list.  This was one crossed off.  Now for the rest.

Alec Lamberton lives in Australia, and has been writing stories and pitching TV and movie scripts for what seems like a long time. His first SF short story collection, ‘Catching Light’, is available on Amazon.