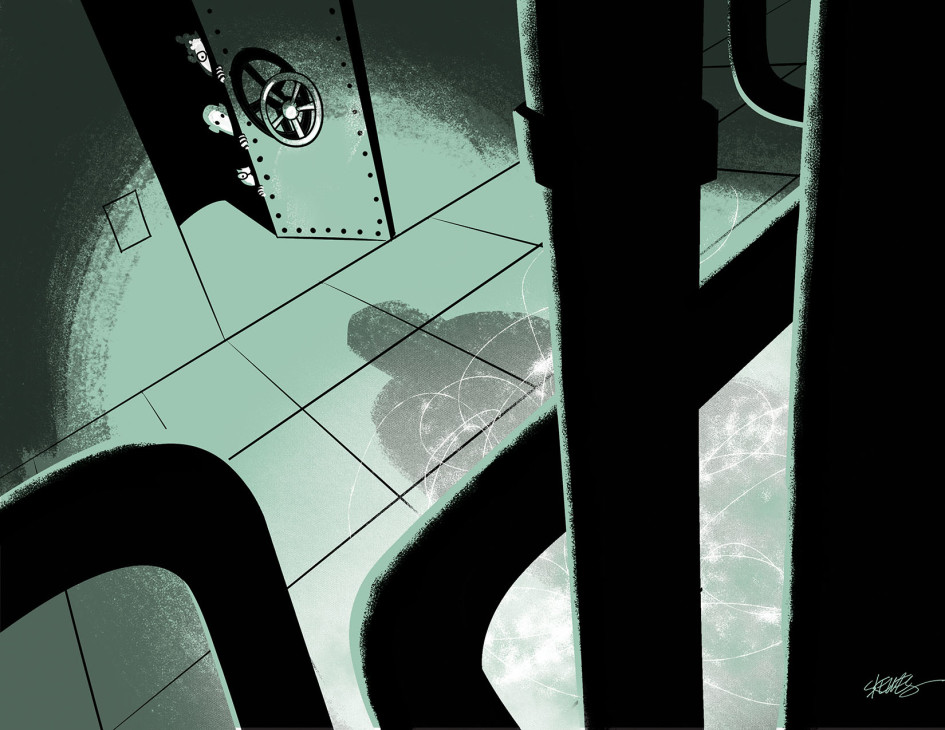 The trio’s lab coats billowed out behind them as they rushed down the cold, white university corridor; the two men argued with each other over top of their younger female colleague. It was an old argument, but Jenkins, the taller of the two men, felt renewed anxiety in his soul as he once again tried to drive his point into his male colleague’s balding head. They turned a corner and continued their brisk pace; Stacy Polo, a student at the university on a work program, tried to keep up with the larger strides.

“Just shut-up for two God damn seconds! Can you do that, Collins?!” Jenkins raged, spittle catching in his brown and gray beard. “Whether I’m right or wrong isn’t the point–”

“Then what is the point, Jenkins?” Collins sarcastically asked, shaking his pink head. Jenkins’ eyes widened for a moment or two. Catching hold of himself on the border of anger and physical violence, he avoided the welcoming chasm and retorted as sanely as he could.

“For the fifteenth time, Collins, we’re talking about matter transference. Matter!” He waited a few seconds and then realized that his inferences were not making even a minor dent on his co-worker’s psyche. “What’s the use?” he finally said. “Your mind’s about as open to this as Boudreau’s.”

Dr. Alanna Boudreau was the project head who had taken one of Jenkins’ notebooks on worm holes and the frothy fabric of space a year ago, turning it into an active project with unlimited government funding for the next five years. For some unknown reason, Jenkins had never mentioned the thievery to anyone besides Boudreau. He supposed it was partly because she had managed to accomplish in a two-hour meeting what he had been unable to do in ten years. When she threatened him with expulsion from his own theories, he quickly allowed her the leadership mantle. But the notebook had been only part of Jenkins’ theories.

As the trio whisked around yet another corner, a faint but unmistakable hum began to permeate the air. They didn’t hear it so much as feel it resonating through their lungs and bones. Jenkins could feel his heart start to slap his lab coat’s lapel to and fro.

“If you were more in sync with Dr. Boudreau’s thinking we wouldn’t have had to find out about the experiment second-hand. We would have been there,” Collins finally spouted. Jenkins let it hit his back and roll off, ignoring the twinge he still felt when his theories were referred to as her’s.

He knew that in a warped kind of way, Collins was right. If Jenkins had been able to ignore his doubts about the matter transference project they would have been right there when Boudreau threw the switch. As it was, they were still several corridors away from the security lock which wouldn’t let them in once the transference began.

Jenkins felt something electric fringe his panic. The idea that something he’d created in his mind was about to become real had an odd excitement about it. But the other notebook — the one Boudreau didn’t get, the one Jenkins constantly carried in his pocket — could never be completely erased from his mind’s eye. He jammed a finger in his ear and rubbed as the hum’s growing intensity tickled his sinuses.

Stacy shivered from the effect of the growing hum. She looked at Jenkins for a moment. He met her gaze and quickly turned his attention to the shortening hallway before him. She looked down for a moment and then up at Dr. Collins. Finally, through thick intimidation, she spoke.

“What if he’s right?” She asked innocently.

Collins’ head snapped around when he heard this. He glowered at her, sending her gaze down to watch the floor as it slid away beneath them. He then looked at Jenkins. Jenkins was still looking down the hall, but now he had an unmistakable smile on his face. Collins popped a Rolaids into his rictus-frozen mouth to cool the burning in his chest as they turned the final corner.

Their eyes were involuntarily squinting from the volume of the magnetic hum that now thickly filled the air. At the end of this hallway was a huge metallic door the height and width of the entire hall. To its left was a small control panel — the security lock. There were two lights on its top and a protruding groove for passcards to be run through below them.

At the moment the light was green, meaning entrance was allowed. Collins pulled his passcard from his breast pocket as the trio picked up their pace. Jenkins’ fear seemed to suddenly take a backseat. Boudreau was wrong –wrong to be taking credit for the project and wrong for moving to experimentation before she had all the facts — but wrong or not, she was making history beyond that door. Just as Collins had completely pulled the card from his pocket, the red light popped on as the green one extinguished itself. The trio slowed and came to a depressed stop less than six feet from the huge door.

“Dammit!” Collins spouted as he repeatedly ran his passcard through the red illuminated slot. The computer chip continually chimed its taunt in rhythm with the deafening hum from beyond the massive door — “Access denied…access denied…access denied…” He finally gave up and spun on Jenkins, once again catching Stacy between them. “This is your fault!”

“Listen,” Jenkins said, ignoring Collins’ childish remark. “You’ve got to listen to me. We may be too late, but…well, just do me — us — a favor and listen. Okay…Paul?” Jenkins pulled the notebook out of his lab coat pocket. Collins rolled his eyes and futilely tried his passcard again.

“Christ, you’re not singing that `other notebook’ song again, are you?” Collins said without looking at Jenkins. Jenkins froze and looked up at Collins’ back.

“How…Boudreau is the only one I told about this. How did you…” It suddenly made sense. All of it. Even the way Boudreau had managed to get his notebook out of his quarters. The quarters he shared with Collins. “You bastard. It was you!”

Jenkins lashed out over Stacy’s head and caught Collins just above the eye with a glancing blow. Stunned more than hurt, Collins threw himself back against the wall, the control panel digging into his spine.

“Doctor Jenkins! Stop it!” Stacy yelled as she grabbed Jenkins in an attempt to stop his attack. He could have easily tossed her aside, but his rage was being sapped by depression. The revelation that everyone had been against him, had made a fool of him, was almost too much to stand.

“You don’t even know what you’re doing!” Jenkins yelled, allowing himself to be restrained. “The two of you have followed my notes like they’re some kind of instruction manual. But you’ve only considered the action. What about the re-action? What about the unknown?”

Before Collins could reply, the two scientists and the scientist-to-be froze. The hum had stopped.

They all wondered the same thing: ‘Had Boudreau done it?’ A second later the light on the control panel flashed over to green. Collins stared at the light for a moment, mesmerized. Finally, he lifted a shaking hand and slowly slid his passcard through the slot. Massive tumblers spun, deafening in the sudden silence, and slowly the wall-of-door began to open.

After what seemed like hours, the lab came into view. Hesitantly, they entered. Jenkins immediately noticed the odor of brimstone in the air; a side effect that wasn’t projected. To the left they felt the heat that had been generated for the transference from the huge transformers. In front of them, beyond the computer banks, monitors and gauges that could only be rivaled by Mission Control in Houston, stood two square four-by-four foot platforms.

On what they knew to be the ‘receiving platform’ were strange burn marks and gouges in the platform’s floor. They reached the control panel and stopped. On the ‘sending’ platform shimmered a strange, whitish ooze. Jenkins was sure he knew what this was as he shook all over and fought for his voice.

He took a few tentative steps towards the platform until he stood directly over it. “Oh…my…God,” he finally whispered. He spun around to reaffirm his beliefs to Collins — but he was too late.

Just as he was about to speak, the insane Boudreau leapt up from behind the control panel where she had been feeding on her assistant and took off the top of Collins’ head with a crescent wrench. Collins didn’t even scream. He just flopped over onto the floor like a rag doll, moist cheese oozing from his new convertible. Stacy screamed. She screamed for two as she ran to Jenkins’ side. The Boudreau-thing ignored her, for now, and leapt onto her new morsel.

“Wha…what’s going on?! What happened to Doctor Boudreau?!” She begged of Jenkins, yanking at his lab coat like a three year old who has to know if Santa Claus is real or not. He fought for his rationale.

“It’s…it’s just as I feared,” he answered, swallowing loudly as he watched Boudreau scoop up a handful of what had moments ago been Collins’ mind. “I kept telling them, matter transference, matter transference. But they wouldn’t listen.” He was having trouble keeping his voice from cracking. Stacy stared at him, dumbfounded. He caught her gaze out of the corner of his eye.

“Don’t you see?!” He begged of her, pointing to the goop on the sending platform. Before he could explain further, the Boudreau-thing stood from its carnal pleasures and wickedly smiled at the only other living things in the room. It took a step towards them. Jenkins threw the notebook he still had in his hand at the inhumanity and then leapt with all his strength onto the monster he, for all intents and purposes, had created. “Get out! Run! Run!” But Stacy was fear-frozen to the floor.

The Boudreau-thing ignored the added weight of its former colleague and slammed its hand down on the control panel. The massive door at the top of the stairs slowly began to close. The mechanism was slow, but Stacy knew she would never make it. As Jenkins’ spine was twisted like the colors on a Barber’s pole, the girl looked down at the notebook that had skidded to her feet. She read the scribbled title as she incoherently understood the sound of approaching footsteps.

The Incongruity Of The Human Soul And Matter Transference.