Asleep and Awake On the Man’s Freeway 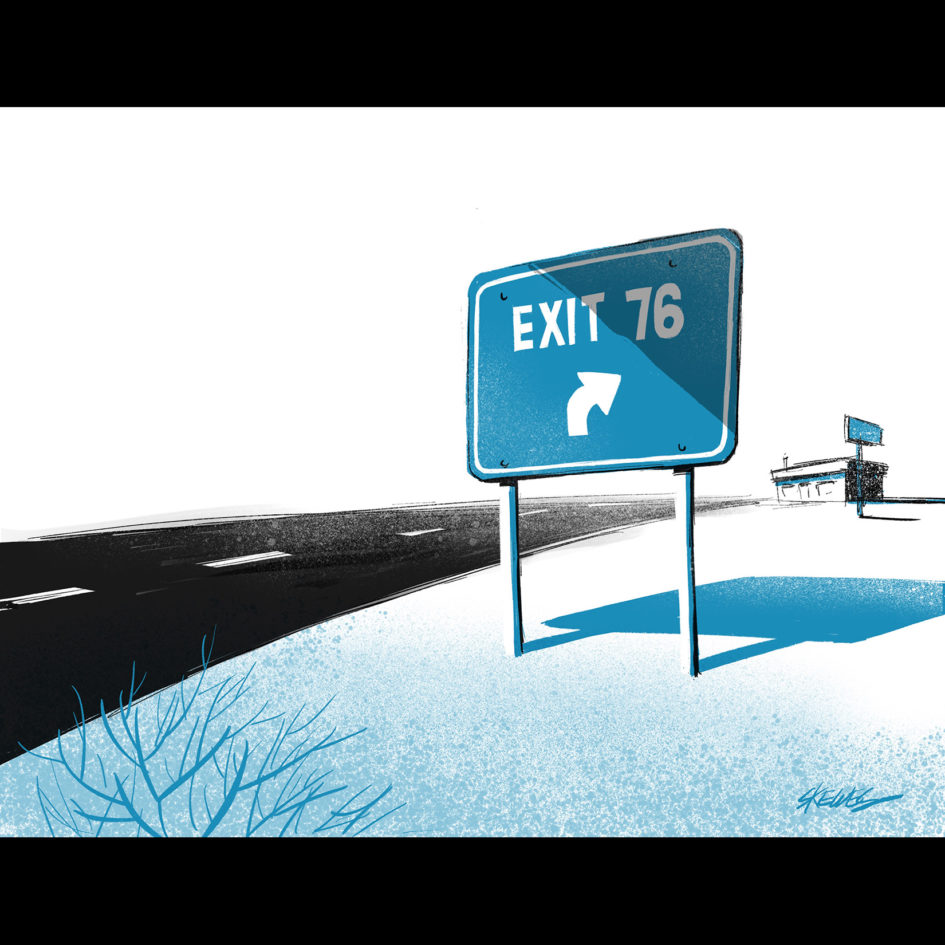 After almost eight hours of heat, highway and latent hostility, David Long found his options dwindling to two choices; kill a drink or strangle Dianne. Since the latter clearly wasn’t acceptable, Long saw his search for a roadside bar as a humanitarian service, the added hours in their procession to Los Angeles as acceptable losses…and the increasingly-vicious snipes of the stranger his wife was becoming as…as what? Words failed him.

Long allowed himself a rueful smile; Words had, indeed, certainly failed him.

“Oh, don’t do smug, okay?” the stranger in the passenger seat sneered at him. “You don’t do it good, and it doesn’t look good on you.”

(And what he thought was: ‘Well.’ You don’t do it ‘well.’ But that would have been diplomatically inadvisable at this juncture, so, instead:)

And, like a brutal echo from the passenger seat: “Just what?”

He sighed, hands sensibly at two and ten on the steering wheel, squinting into the unceasing, bleaching blaze of the sun. Far ahead he noted a tiny brown clot of a building, and he had one of those minor, useless psychic flashes: There was a bar in there, cozy, old, dark and—Words failing him, again—inviting?

But she was staring at him, so he stammered:

“Just, I, I was just, you know, playing with words—” In yet another useless, myopic psychic flash, he regretted the choice of these particular words the instant they hit the air.

She barked ugly laughter. “Yeah, ‘just playing with words,’ that pretty well sums it up! I know, having a day job isn’t artistic, but guess what’s been paying the bills?” She glared balefully at the horizon, the wronged backer of the wrong horse, sweating in her pantsuit despite the air conditioning.

Long blinked: Eight hours in the car, and he only just now realized, cognized (was that a word? Something to consider, later)—she was wearing a fachrissakes pantsuit. She had it on—and he hadn’t noticed. Of whom did that speak the larger, sadder volume?

“I know,” he said, starting to see outlines of the sign outside what he now knew to be a bar; swoopy, ‘70s lounge chic. Place probably had strings of small light bulbs laying down the walls. “I— ”

“Oh, you know, you know!” she scowled, flipping the back of her dark hand in his general direction. The lines of her jacket were crisp and sensible. Dianne Melissa Long, nee Santiago. She had a hot little body under the pantsuit…not that it mattered much, these days. The geometry of her, arguably excellent, had somehow become buried under other numbers now. The numbers, as the vernacular had it. Another useless flash, backward this time.

First date, his fire escape over California Avenue in San Francisco. Without a word—as out of left field as possible—she’d turned to him, smiling, cupped her breasts out of her bra with her small, dark hands, and waited for him to act. It was unromantic as could be. It was the sexiest thing imaginable.

He was decelerating without really thinking about it. Before she could ask, he spoke. “What…what happened to us? I mean, this, here, this isn’t…”

He clutched at nothing with his right hand, as though he could cull tangibility from the air. “Yeah, okay—I’m not thrilled about moving. I also know you’ve been carrying us, and…and I’m sorry for that, I really am. I guess I’m not Stephen King just yet, huh?” He smiled at her, thinking she would still do that fire escape proud. “But you are still beautiful.”

She locked eyes with him. “Oh, grow up.”

Long felt his smile crumbling, but he had no idea what to do about it. He wanted to say something that seemed to make no sense to his own road-fatigued brain.  Something about how he could barely grasp, even now, that they were both adults, with professions, obligations (her more than him, perhaps), credit cards, bills, a marriage. It was for a for-real, grown-up thing they had! Something else she would doubtless, in her current humor, shoot down. That was when the anger—dim and resisted, but there—started. Before anything really ugly could happen, however—

“Are you turning off here?” She pointed at the exit rolling up on them. Her sleek wrist gleamed in the afternoon sunlight “What’s this?”

And what he wanted to say was: Your wrists are almost as sexy as your legs. Or your eyes. Remember the fire escape?

But what he said was: “There’s…a bar here.” He shrugged. “Don’t ask; it’s been a long, long ride, and I don’t know about you, babe, but I could use some alcohol.”

Long’s business—scant though it had been, no arguments there—was words, and these words came out totally wrong, in the worst way possible. Even as they emerged from his mouth in leaden breaths, he expected a backlash, a verbal counter-attack. She didn’t say a word. Maybe, like him, she was processing the fact that, in five years of not-particularly-brilliant wedlock, he had never once called her babe.

And what the hell: It was, in fact, a dark, cozy place. Swoopy, ‘70s lounge chic. Strings of small light bulbs laying down the walls. Long wasn’t even surprised, just…mesmerized.

“You know what?” she’d said, the sudden absence of road-noise deafening in the newly-parked silence, “I’m not really up for a drink this early in the day. I guess it’s a writer thing. I’ll just wait in the car, I’ve got my book.” Eerily—mockingly?—she’d cupped his cheek, tenderly, with one of her wonderful hands. “Okay?”

If he’d been going to cry, it would have been then. He didn’t. And that was scary.

Not a window in the joint—if illumination wasn’t coming from the beaded lights on the walls, the shade over the pool table or the neon Pabst Blue Ribbon signs, the place didn’t want anything to do with the stuff.

The sudden, cool darkness came as a relief Long couldn’t (hah!) put into words. It wasn’t the utter absence of customers, but that was a definite romantic plus. It was…the place. Long’s particular curse was—had always been—his crippling, damning inability to articulate that which most concerned him. Hell of a stitch for a writer, a man of words, you might say…and you’d be right.

This, this place, this thing, this this, right here—the darkness, the strung lights, the advertisement-by-neon, the spot lit pool table (like some gumball machine for grown-ups), the wafting aural ghosts of Classic Rock from the juke—this meant something, and it resonated from a point well before that at which David Long had first ever comprehended—let alone had been granted access to—anything like your beer garden-variety bar; that ubiquitous den of social psychoanalysis.

Another thing that got him were the beer-by-the-glass prices, posted on a glossy wooden sign behind the bar.

“Forty-four cents?” Long read aloud, unbelieving. Maybe the place was taking the whole ‘70s motif seriously. Of course, he had no basis for comparison—in the ‘70s, David Long had been more than a decade away from such places, and he wouldn’t have had the first clue what to do with a leggy, wanton creature like Dianne Santiago (or any female, for that matter—Late Bloomers, unite!)

“Would you, please?” Long wasn’t sure if it was supposed to be funny or not. “Beer, just…a beer, okay? Anything. Surprise me.”

The bartender nodded matter-of-factly, began to draw a small glass of beer from the tap.  Long hoped the beer would be cold, nasty and…old. He couldn’t have explained much better than that. He glanced at himself in the mirror behind the bar. His recently-acquired smattering of gray didn’t go so well with a physique that hadn’t been lean to begin with, and was getting less so…but here, his hair seemed to have the darker, healthier sheen he remembered.

The bartender placed his glass before him. “Buy you one?” Long asked (not without a certain fiduciary irony).

She nodded, and quickly produced a duplicate glass for herself. They raised, clinked, drank. The song flowing from the jukebox—about a hotel you could check into, but never leave—swirled around him, and the desolate pool table’s gumball-machine aspect struck him once again: There was a time when this game was all colors, he thought, unaware that his face was going slack—and then the bartender put her hand on his arm.

The music washed over him, clean and new. The neon brighter now, clearer.

He had to think about it. About the car, and not her hand. The car.

If it was still there.

Something about…about getting Diane to join him…and then it was gone.

He realized with a dull, slow shock that the drink—a mere dwarf’s-glass of a draft—was getting to him, buzzing him. He felt drunk. “Sure,” he said, and started to reach for his wallet. She started smiling. He stopped.

She hadn’t carded him, of course. Not yet. It wouldn’t be long now.