Children of the New Moon 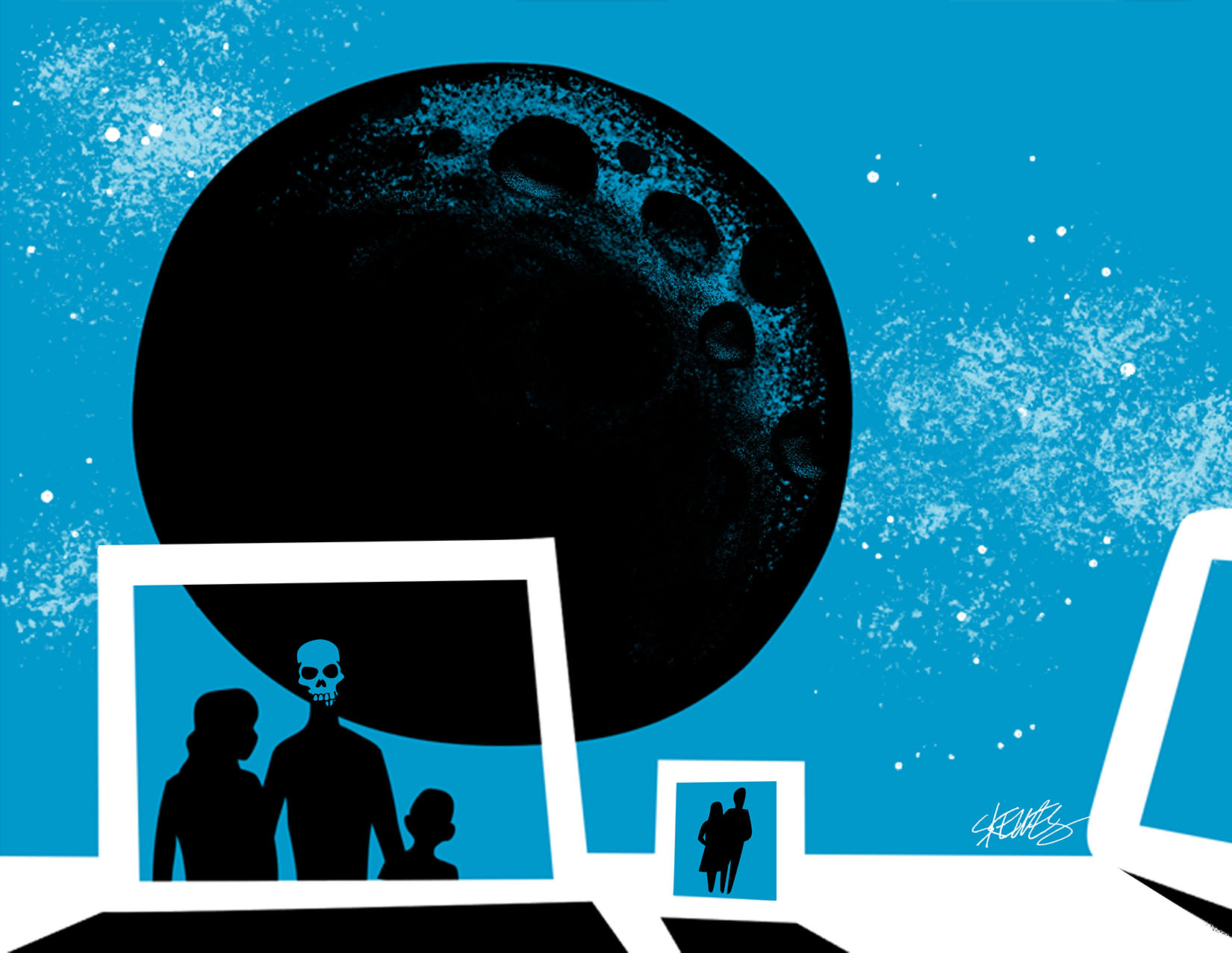 GIVE HIM THE ACTUAL NEWSPAPER ISSUED ON THE DAY HE WAS BORN! NOT JUST A FRONT PAGE OR REPRODUCTION, BUT THE ACTUAL AND COMPLETE EDITION* OF THE NEW YORK TIMES, ANY DATE 1880-2013!

*(WEEKEND EDITIONS NEWS SECTION ONLY)! COMES IN A LEATHERETTE SHOWCASE PERSONALIZED WITH THE RECIPIENT’S NAME AND BIRTHDATE PRINTED IN GOLD! RARE AND VALUABLE! AN INSTANT HEIRLOOM! THE PERFECT BIRTHDAY GIFT! ONLY $29.95! ORDER TODAY!

Bette moved the sugar bowl aside and smoothed the newspaper against the table. She hunched over the “BIRTH NOTICES” column again. Giving it a closer look.

But it must be. She’d seen his birth certificate.

“There were still valentines on the recovery room wall,” his mother had said.

So why wasn’t he listed?

Bette tapped out her cigarette. Trying not to think about it.

Why wasn’t he listed?

Outside, the garage door clicked. It hesitated a moment, then began rumbling open.

She heard Andrew’s car crunch into the driveway.

Hide it, she thought.

Bette folded the newspaper and stuffed it in the leatherette pouch. She put it back in the crumpled mailing envelope.

Hide it from him, she said to herself, bolting for the kitchen closet.

She elbowed the parcel under the prehistoric ironing board.

The sound of the car eased into the garage. It sputtered against the cinder-block walls, then coughed to a stop.

Bette caught her reflection in the microwave oven and squinted. Adjusting her smile.

She turned for the garage-entry door. Trying not to think about it.

Hide what you’re thinking from him.

She smiled, hearing him step gingerly across the oil-stained concrete to the door.

Bette shrugged and spun her fork in the salad. “I checked that already.” She looked at Michelle, wondering how much more she should say. The problem with best friends, she thought, is that you never know when to stop talking.

This isn’t the place, she decided.

“I spent the whole morning in the library,” she continued. “Checked every day in February, 1985, as a matter of fact. He’s not listed.”

“Maybe you got your year wrong.”

“Birth certificates can be faked, honey.”

There. She’d said it. Out loud.

Why would he fake it.

She’d been his wife for eleven years.

Eleven wonderful years, she reminded herself.

But there was the matter of the Frisbee. The glow-in-the-dark Frisbee. The one he’d take into the back yard twelve nights a year.

Each time there was a New Moon.

A completely-shadowed, almost invisible New Moon. Hanging like a docile black hole in the stars. One night a month.

Last month he’d taken Peter out with him.

Naturally, she’d asked him about it. He’d answered that the “darkness” of the New Moon “intensified” the glow-in-the-dark effect. And throwing the Frisbee “relaxed” him.

February 26, 1985 had been a New Moon. According to the Actual Newspaper Issued On The Day He Was Born.

“Maybe he phonied his birth certificate to get out of the draft,” offered Michelle.

She tried to flag down a waiter.

“After 9/11,” Michelle shrugged casually. “You don’t remember? Lot of talk about beefing up the military, resuming the draft, that kind of thing. Maybe Andrew wasn’t too keen on going to Iraq.”

No. That couldn’t be it.

She smiled at Michelle.

Bette stared at the microfiche screen. Trying not to think about it.

But not listed in the “BIRTH NOTICES” column of the newspaper.

Harvey was Andrew’s best friend. His son, Timmy, was Peter’s age. Bette drove their carpool every Monday, Wednesday, and Friday.

Timmy hadn’t been suspicious when she started asking questions.

And Harvey was three years older than Andrew, she knew.

“My Mom’s birthday is April 8 and my sister’s birthday is August 15, and my birthday was last month, January 26, and I got a couple of walkie-talkies that my sister broke during my party and a mountain bike that she put a flat in about two weeks ago and a trawling net that she can’t break, ’cause she’s not coming along next month when my Dad takes me trawling with him …”

“Yeah. You know–fishing in the ocean.”

Which required a knowledge of tides, she knew.

And the thing that caused tides.

Bette sucked the smoke through her teeth.

Tomorrow was Andrew’s thirtieth birthday party. All the arrangements were made. All his friends would be there.

Bette had wrapped his present–the birthday newspaper in its leatherette showcase, personalized with his name and birthdate–in space station wrapping paper.

She wondered if he’d look for his name in the “BIRTH NOTICES” column.

And what excuse he’d use.

“Told you,” Michelle had said.

Andrew had opened the present. He’d kissed Bette and rifled through the News, Comics, and Sports sections–pausing to dispute the box score of an ancient Yankees-Red Sox spring training game. Then he’d reached the “BIRTH NOTICES” column, smiled at it facetiously, and shaken his head. “The Times never does print St. Vincent’s births,” he’d reported. “Separation of church and journalism, don’t you know.”

Nobody had questioned it.

Michelle had smiled. “Told you you had brain trouble, girl.”

She’d wanted to point it out, wanted to ask what its significance was, wanted to find out from Harvey Toback whether the same ecumenical lapse had caused him to be omitted from his birthday’s paper.

Bette twisted her feet under the sheets.

Maybe that was the time, she thought.

Maybe that was the time to ask.

She heard Andrew re-arranging coats in the bedroom closet. Positioning his new telescope protectively within them.

His birthday present from his mother.

Andrew stepped out of the closet and closed the door. Then tightened the cord of his red robe.

He put an index finger to his left eye, blinked something away, and walked slowly toward the bed.

Bette had placed the newspaper under the sheet on his side.

He threw back the blanket, turned away from her, and sat on it.

He put his hand to the sheet, pitched himself back to his feet, turned around, and–as if at a sidewalk machine–lifted the sheet, pulled out the newspaper, and let it drop.

He looked at the front page.

He’ll say something sweet, she thought.

“This was real special, hon.”

“But what about the New Moon?”

The paper folded over on itself–she suddenly saw his face. He wasn’t smiling.

Bette pointed at the paper. “That one.” She tried not to tremble. “The one on the day you say you were born.”

He blinked. His cheek muscles reined in.

“You mean the day I was born.”

A golf club. Should have put a golf club in the bed, she thought. Or a steak knife.

She looked up at him. Try.

He smiled a slow, crinkly grin.

Without turning away from her, he dropped the middle section of the paper to the night-table, upending an ashtray of warm cigarette butts.

He nodded and folded the paper in his hands.

“Yes. I guess I do know what you mean. And it’s too bad you couldn’t have

forgotten about it.” He paused. “Michelle told me.”

“Children of the New Moon.”

He opened the front section of the paper, matter-of-factly turning to page eight.

“You had the right day, you know.” He grinned calmly. “Just the wrong section.”

He folded the paper in half, then in quarters.

He dropped the paper in Bette’s lap.

Bette choked as she read.

Andrew undid the cord of his robe.

Tom Lavagnino is a playwright living in Los Angeles. He is a graduate of NYU and AFI, a former editor at 5th Street International Poker Magazine, and co-wrote the 2015 feature film Home Sweet Hell for Darko / Sony Pictures Entertainment.

Have a comment? Leave it on the Editor’s Page.