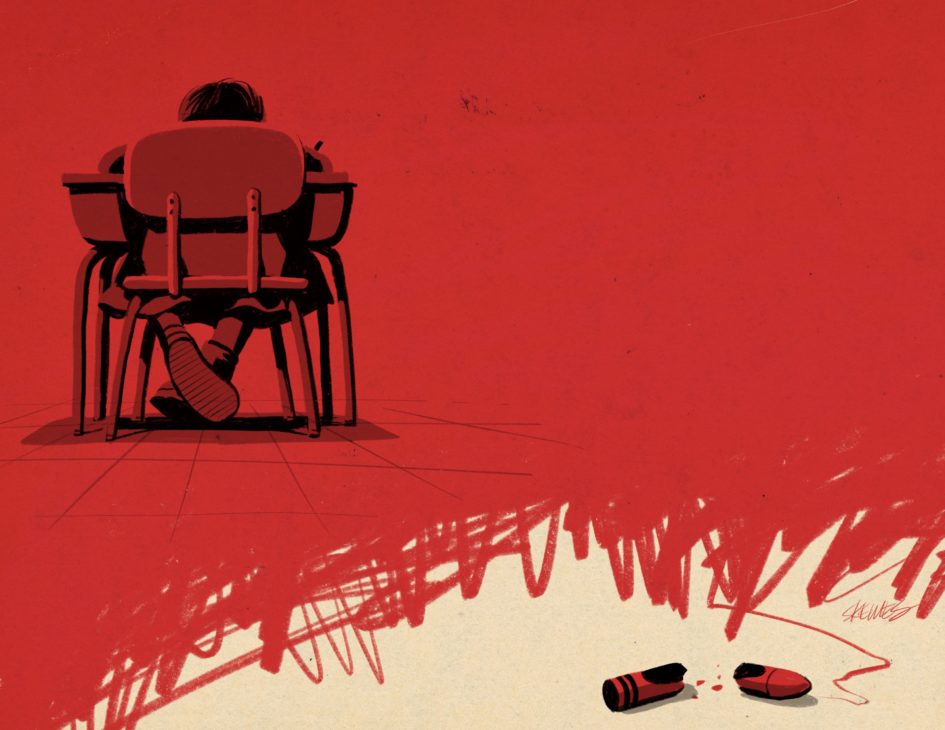 I knew she was a smart little girl. Lots of kids are smart, and in lots of different ways. The word special gets thrown around quite a bit, and I hesitate to use it. In Sally’s case, I think it’s safe to say she was special after all.

The first thing I noticed was the way she’d take notes in class. We did a unit on beavers and instead of using words to record the facts, she drew little pictures of the beavers. When asked later, she was able to explain what the beavers were doing in the pictures, and she’d learned the facts through the process of making the little drawings. They also helped her recall those facts later.

As a teacher, there was nothing I could say. I may have preferred she do things the way the other kids did, or the way I would prefer them, but that wasn’t really relevant if she was still doing well in terms of grading. I did mention it to her parents at the Christmas meetings, just before the holidays. They seemed to feel the whole thing was rather positive and didn’t mind that Sally was taking notation this way so long as she was still doing well. Though I brought up that it could mean problems for her later on, they showed no concern.

The second thing that made me think she might be one of the special ones was when we did the standardized question form for the state, the 211, which teachers referred to as the Emergence Test. We didn’t tell the kids it was any kind of test, and we didn’t explain to them that it would be used – nearly exclusively – to classify and place them for the next stages of their education. The Emergence Test was so very important we didn’t even explain it to the parents unless we had to.

The Emergence Test always has somewhere between thirty and fifty questions. It’s rewritten each year, as the people who work on tests like these try to master the social, racial and financial biases that can send children down incorrect paths.

This year there was a question I’d never seen before. The question, as written, was: What from the world around you would you miss if it didn’t exist anymore?

I thought it was painfully worded and terribly confusing, and yet as I asked it to both my grade three classes, I learned that it was not a bit of a problem for most of the kids.

I looked into the data after the incident, and found that my kids lined up pretty well with the state averages.

For the question, ‘What from the world around you would you miss?’ the top five answers were, in descending order: television, parents, video game system, sibling, pets/animals. Nothing that would surprise anyone.

When Sally was asked this question, she thought about it only briefly before answering with a single word.

This was a delightful answer, both a beautiful thing in itself and a timely insight into Sally’s mind and how it worked. She liked to draw a lot, to the point that she’d often do it rather than paying attention in class – a trend that was increasing – and knowing that color was such a big part of her life made me feel a lot better as a teacher. If she could get the proper guidance, and not be pushed too far down some clogged academic path, she might be able to blossom as a visual artist, or something along those lines.

When she got to high school there would be art classes, and that would help, though electives like art were often taken by people trying to avoid real school work, and those environments weren’t always conducive to a girl like Sally who loved colors and just wanted to draw.

I shared these insights with Sally’s parents and set them on their own path, one to consider what they could do to encourage and strengthen Sally’s resolve, to support her talents and proclivities without pushing her, to make sure she got the basic education that school could still provide despite her particular leanings.

I didn’t learn it until after the fact. They’d decided to put Sally in a special school, an art and drama academy some sixty miles from their home. The father was going to alter his work schedule to drive her there in the mornings, and the mother was going to do something similar to be able to pick the girl up after school.

Knowing this then would’ve changed nothing, and yet it adds sorrow to think she might’ve been okay had the transfer only come sooner.

Or had I seen her gift sooner. I can’t help but feel somewhat responsible due to my lack of insight.

As a different sort of little girl, Sally had some trouble. We tried hard in our school to instill a sense of equality and fairness, but as is the way in public environments, those who are different are often presented with the hardest trials. Though she wasn’t physically picked on, there were a pair of girls who on occasion would say nasty things to Sally.

In my defense, she didn’t seem riled by the bad behavior. She often did exactly the right thing and ignored the girls entirely. Only on one occasion can I remember Sally rising to their jibes, and it was to say something so savage and unexpected that I was flabbergasted as to what to do. In the end I decided to do nothing, assuming it an anomaly.

She’d told the bigger of the two girls that instead of bothering her, she should go hang out with prostitutes like her father. The girl had burst into tears and been ushered away by her friend.

Sally didn’t pay any more attention than was absolutely necessary, returning to her drawing immediately. Her facial expression didn’t even change.

Some would call this a warning sign. I figured she’d heard something from her parents. It wouldn’t have been the first time a piece of gossip from home had made its way into the classroom or onto the playground. Adults have a tendency to say nasty things about one another and children have a desire to repeat those things.

I thought things were fine. I now know that there were other incidents, even escalating incidents that took place outside of my supervision. I can only say that I didn’t see it coming.

I’ve already recounted it so many times.

Yes, all right. Give me a second.

It was Friday. All the kids had gone out for recess. It was raining hard, and when it does, we often let some of the kids stay inside if they don’t have proper rain gear. As you know, we have a wide range of monetary backgrounds represented here. It didn’t occur to me that Sally and her bully were the only two kids that stayed in that day.

Mr. Lewis was on rounds and he’d gone to the bathroom. That’s all I know. I can’t speak for him or what he was doing, how he does his job. We aren’t close but I always liked him and I thought him a good teacher.

I came in right at the bell and left Wanda with the kids as they lined up to come back inside. I walked into the classroom and saw…the body. You know, it was where the police found it. No one moved it and no one was allowed in afterward.

Sally was at her desk, drawing. She didn’t look upset at all. I actually saw the X-Acto knife first, before I saw the dead girl on the ground. The knife was in great contrast to the pencil case and the markers, sitting there amongst them, three notches open and covered in blood.

I took a half-dozen steps inside and saw the body just as I was about to ask Sally what was going on. The girl’s throat was opened up and, you know the rest. A lot of blood.

A noise came out of me and Sally tensed for a second, the only sign she was aware, that she knew something bad had happened. Then she settled back down and said not a word.

I ran to Carla, the bully. I stopped, nearly falling, and barely avoided the blood. I didn’t bother to check for vitals. I ended up standing right next to Sally. She was drawing a picture of flowers, like a field, full of flowers.

I’m fine. Is there anything else?

I asked her if she was okay. She shrugged. I asked if I could take the knife, and she nodded. I carefully took it and laid it on the desk behind me. I asked her if she’d like to go, to leave the room. She didn’t answer me.

At a loss, I felt the sudden need to make her aware, to have her face what she’d done. I wasn’t cruel. I asked, “Do you know what happened?”

“Do you understand what you did?”

“Would it be okay if we went outside, Sally? Out into the hallway?”

She looked over at me, then, eyes searching. She was so pretty and sweet, not a hint of anything wrong in her eyes. She didn’t look down at the body at all.

“The hallway? Why?” she asked.

“Because we need to clean up the mess,” I said.

“I didn’t mean to make a mess,” she said, suddenly afraid she was in trouble.

“It wasn’t a mistake. I just didn’t think it would be so messy.”

I think that’s right. It’s basically right. I think I remembered it better that second day, when I gave the report at the station. You can check against that, I guess.

I offered her my hand, and a smile, and asked if she would come with me. She didn’t take my hand, but she did rise and begin collecting her things. When all her things were in her pencil case, she pushed the little drawing into the corner of her desk, lining up the edges of the paper. “She said my flowers were shitty,” she said.

“Is that why you did this?” I asked her.

Sally shrugged. “No. She was just being mean. I don’t care.”

Sally looked at the body and said, “Red’s my favorite color.”

Keith Kennedy writes and rights wrongs in Vancouver where he lives with his dastardly wife. This year, he’s published short fiction at Ripples in Space and Haunted MTL, and a bunch of poetry in some awkward places. Check him out at keithkennedy.weebly.com or on Twitter @rkkwriter.