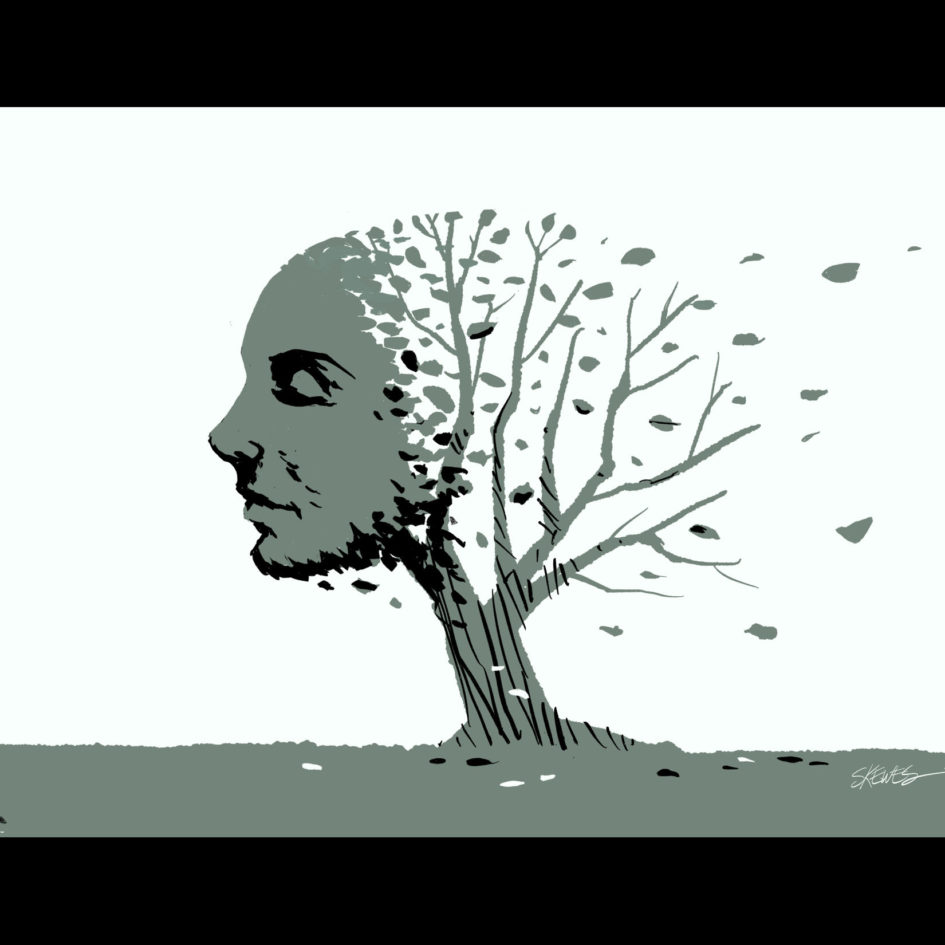 The crisp brown leaves piled up in front of me but did not completely hinder my view of the old, deteriorating house. The house was ugly; hideous. The multiple layers of gray paint peeling off the sides of the house hung in suspended bulky strips. Gray and black shingles covered the ground and let way to several holes in the roof. The porch was rotten and sagging, missing several floorboards. Termite holes peppered the porch railings and the rusted porch swing hung haphazardly by a single chain still loosely bolted to the ceiling. The property sprawled over three acres and butted up to a dense, unwelcoming forest. The lilies that grew in the front yard in the summer were the only thing of beauty on the entire property. The sea of boisterous orange and yellow would blanket the lawn making the grass practically invisible.

Paul had wanted to get rid of them; he said they were unruly and took over the lawn. I had convinced him to keep them. I loved them, they were so beautiful and made me smile even after Paul ceased to. His smile was what stole my heart the very first time I had seen him. It felt like forever since I had seen Paul smile. Sometimes I did miss his smile, on the days that I forgave him; that beautiful comforting grin that graced the lips of the man I loved. I had loved him; passionately, more than I had ever loved anyone before. I still loved him. He had loved me too and had once told me that I was the only woman he had ever loved; that he could ever love. We were so happy together. Then suddenly, we weren’t.

A single long black hair pulled from the collar of my white robe one cold October night sent my entire world spinning and changed my life forever. I couldn’t recall exactly what I had said; all I knew was that Paul had broken my heart and that her name was Joyce. I remembered how I tried to explain my point of view and how he would only hear his own; how after hours and hours of arguing I had crumbled into a sobbing pile on the molding gray carpet of his bedroom floor still clutching the dark hair in my left hand and how he had told me to leave without even speaking.

I had never known pain like that; like a dagger in my chest that I could not remove. I left the house against my will and promised myself one day I would return and she would be gone. I knew in the back of my mind that someday Paul would come for me and we would be together again. From that evening on, I watched the house from the place where I hid and relived that day over and over in my mind…struggling desperately to purge his shameless secret from my memory, to forget the long dark hair and my mind’s conjured visions of its possible owner. I tried to only focus on Paul’s sweet words and take solace in the sound of his voice that resonated in my memory…“The only one I could ever love…The only one I could ever love…The only one I could ever love.”

My throat felt full of gravel and my chest was thick with anger the first time I saw her sitting in the white Adirondack chair wrapped in my robe. All the effort I had taken over the previous two weeks to suppress the horrible memory of her existence was instantly wasted as the anger, disappointment and grief of Paul’s betrayal flooded to the front of my mind. I had wanted to scream to him “Who is she?! What is she doing in my house with you?!” But I couldn’t speak. I couldn’t reveal myself. I couldn’t let him see me.

It was horrible; horrible to watch them together, but I couldn’t look away. I couldn’t move. He kept looking over the top of his newspaper at her with those beautiful eyes of his, the ones that used to gaze at me. I had imagined her to be a hideous, beastly woman with a weather worn face and an abysmal grin. After actually seeing her I couldn’t deny the fact that she was beautiful. Long slender legs peeked out from the white terrycloth robe and teased Paul’s lustful gaze. Her long jet black hair cascaded down her back in rolling curls and ended at her tiny waist. He was beautiful too. They were beautiful together.

I hated them both. I watched them eat breakfast outside together every Sunday for two months. I watched them and felt like I had been hit in the face with a fistful of nails. I couldn’t help myself. I couldn’t stop staring. The cold wind whipped into my soul as I watched them and hated her more and more each day. I didn’t care how cold it got; I longed to see her, to overanalyze her, to find some reason to hate her more than I already did. I wanted her to suffer; I wanted something awful to happen to her. I knew these were horrible thoughts but I couldn’t help myself; she was with him and there was nothing I could do about it. So I just watched. Day after day I watched them. I wasn’t sure if they could see me; see me seeing them from the place where I hid. I was sure they couldn’t but slowly realized I didn’t care if they did. Then as quickly as she had transpired into my life and ruined everything I had, she was gone.

Winter came and I watched the house fall further into disrepair. More shingles flew off the roof and skidded onto the melting snow to be lost in the muck of mud and dead leaves, bricks crumbled off the chimney and thudded to the ground and a family of raccoons made their way into a gaping hole on the west side of the house and up into the attic. The ice that accumulated on the windows made it difficult to see into the living room anymore but I could make out Paul’s silhouette pacing the floor from time to time.

She wasn’t there. I couldn’t see the expression on his face but I could see him wringing his hands together as he paced. I wondered what was wrong and wished I could run to him and tell him I understood; that I forgave him. Sometimes I would see him sitting on the deck, alone, shivering, wrapped in a tattered blue blanket looking out at the forest. I so desperately wanted to be wrapped in that blanket with him, to put my head on his chest and hear his heart beat. I missed him so much sometimes, I wondered if he missed me too.

I had almost completely forgotten about Joyce. I was curious to know what had happened to her, where she had gone and what she was doing but was glad she hadn’t been back. Perhaps she had broken his heart and moved on to another victim; perhaps he had done the same to her. I thought joyfully how wonderful it would be if he had broken her heart; if she had suffered the same pain as I had. I imagined her dejected and sobbing on the rotting gray carpet of his bedroom floor pleading with him to stay and him asking her to leave without saying a word. Perhaps I was the other woman this time and now Paul would come for me. I could only hope; hope he would come to me and tell me that he had been wrong; that he would kneel down and look into my eyes and flash that wonderful smile of his and tell me we could be together again. And I would forgive him. I knew I would forgive him. I already had forgiven him. He hadn’t meant what he had done. He hadn’t meant to drive me away. He loved me. “…More than any other woman ever.”

The first day of spring Paul stepped off the deck into the back yard. He carried in his arms a ragged gray blanket and a look of confusion and concern on his face. He clumsily stepped over the fallen shingles and kicked the pieces of crumbled brick to the side with his boot. He was headed my way. This was it. He was coming back to apologize, I knew it. I knew this day would come. I knew if I were patient enough and forgot about her that one day he would return. I wanted to cry, I wanted to scream his name and run into his arms but I couldn’t move. His dark hair shined in the morning sun as he trudged through the dense forest behind the house. Sweat rolled off the tip of his nose and dripped onto his gray flannel shirt.

My chest felt as if it would explode in anticipation as he neared the place where I hid. What would I say when we were finally face to face? I couldn’t say anything. He looked beautiful. I wanted to be with him so badly. Then suddenly he was standing right in front of me. All the horrible visions that had plagued my mind for so long suddenly vanished and all that remained were the wonderful memories of how in love we were. He had come back for me. He knelt down on the muddy forest floor in front of me and flashed me that wonderful smile. He was as beautiful as ever. Then he bent down and whispered in my left ear.

“I’m sorry, Eleanor.” And laid Joyce’s lifeless body down on the ground next to mine.