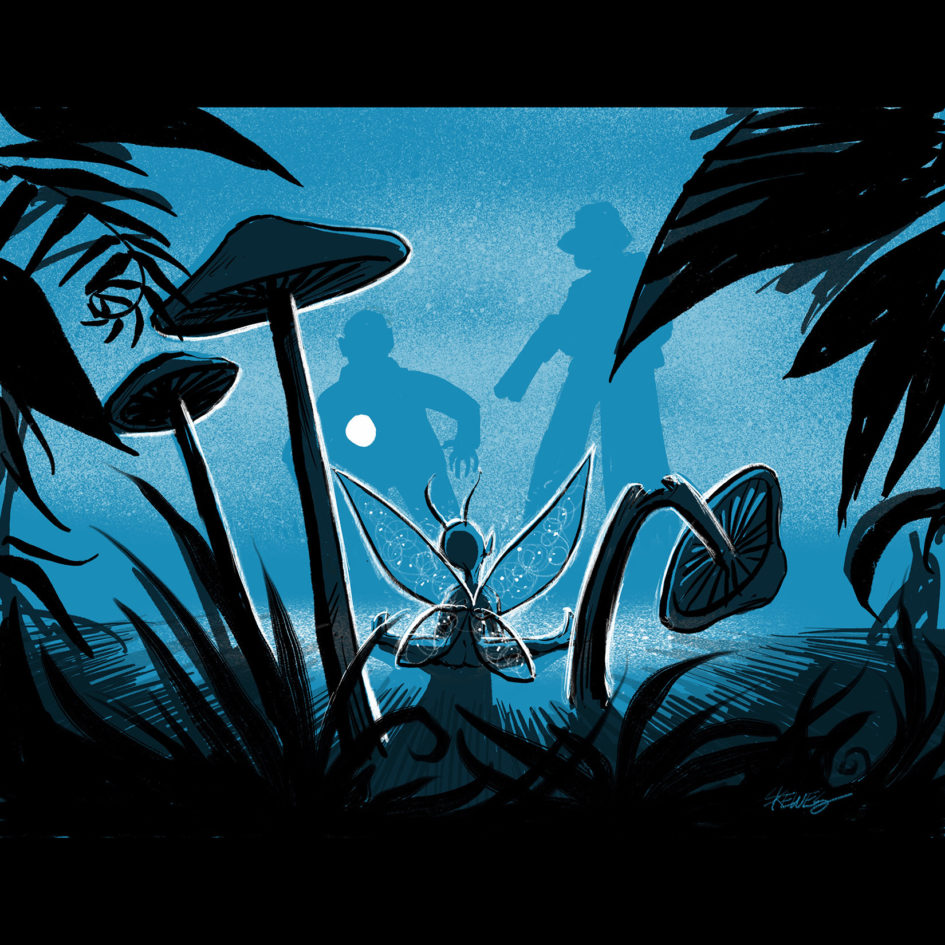 When Henry Willis told me he was taking me to a fairy crossing, I thought he was just being a typical homophobe.
“Okay, I’ve seen the sign,” I said. “Very funny. If we leave now I can still catch the last forty-five minutes of—“

“You think I brought you out here just to lookit a got-damn sign?” Henry shook his head, spat on the ground.

He placed his hands on his narrow hips, resplendent in his full hillbilly hunting glory.  He had on that stupid red flannel hat with the earflaps and the ripped camouflage jacket with the ripped pockets.  And under that zipped up jacket, no doubt, was that moronic T-shirt he liked to wear with the hopefully ironic slogan, “Redneck Don’t Mean Stoopid.”

I shrugged; all I knew was rednecks loved forests and hunting and most of them loved to insult anybody who didn’t meet their criteria for manliness.

Henry saved my daughter’s life five years ago when she was abducted by a neighborhood predator. He refused the reward; all he wanted, he said, was to know he had a friend. Not a day goes by I don’t wish he’d been interested in money, today being an especially prime example.

Cocking his head to the left, Henry motioned for me to follow him deeper into the forest. We walked a narrow path, through sharp twigs and muddy patches of Earth, up bumpy hills and around reeking animal carcasses. I questioned my sanity but by then we’d gone too far for me to get back without help.

Henry stopped walking, stepped aside so I could see around him. The forest floor stretched out for several feet, interrupted by a smattering of trees.

Grunting, I turned to tell him I was finished with his hillbilly crap when something caught the corner of my eye. Movement. Blurry, easily missed. Eyes narrowed, I turned my head slowly, coming to rest on the tiny winged creature lying on the ground before me.

The pride in his voice eclipsed my shock, bringing me back to normalcy. Why had he caused this beautiful creature pain?

He always said that; it was his lifelong mantra. Henry, who would never have kids of his own, believed he was here to protect the
ones everybody else had.

“Seen that sign for years. Never thought nothin’ of it.”

A joke was what he thought it was until one day while hiking through, he saw them. Fairies. Dozens of them flitting about, spraying gold and silver pixie dust like the leftovers from a half-conceived Disney flick.

At first, he’d loved standing among them, absorbing the magic. He made several trips and they welcomed him happily, gaining his trust, until they asked him for a child.

“Told them I didn’t have no child. They told me to bring them one.”

And he did, without question. His nephew Jerome. Henry figured Jerome would have the same experience his uncle had, an enchanted trip into the heart of joy. Then the boy’s laugher turned to choking and he fainted dead away onto the forest floor. Henry barely got the boy to the hospital in time.

“He don’t remember what happened but I do.” The way he said that last part caused me to take a few steps back. “Been huntin’ them ever since.”

I followed his gaze to the writhing creature on the ground. It opened its onyx eyes and looked up at me with an expression of such desperation and hope it brought a tear to my eye, which Henry noticed.

“Don’t waste no tears on that little fucker. It don’t deserve pity from somebody good as you.”

I shuddered, whether from the breeze or my own inner revulsion I cannot say. Overhead, the sun did its best to conceal itself behind a clump of fluffy clouds; soon it would start getting dark and we’d either have to leave or bed down for the night. I was ready to take my chances in the pitch blackness if it meant not being around Henry another moment.

When I spoke again, it was at a slow, measured pace. “Why did you bring me here?”

Henry grunted. “Boy, for somebody so smart, sometimes you…this is the last one. I done caught and killed all the rest.”

Oh, Jesus. Now it all made sense. I shook my head over and over, stepping back, away from the fairy, away from Henry and, ultimately, back into some semblance of sanity.

“They kill kids,” he said as if nothing further needed to be said.

But it was so beautiful, so ethereal. I wanted to bend down and scoop it up and run away with it so Henry couldn’t destroy this wonderful thing. I wanted to nurse its wounds and help it bring back others of its kind so the world could once again know true beauty. Lost in these thoughts, it took me a moment to realize Henry was yelling my name.

I turned to face him as if in a fog and blinked, forcing my head down until I saw the fairy in the palm of my hand. When had I picked it up?

It smiled up at me weakly and said, “Bring me children?” and licked its practically non-existent lips.

I cried out and dropped it to the ground, lashing out with one foot and then the other, over and over, harder and faster, until the squealing creature beneath me was little more than a pile of fluids. It looked as if I’d stomped on a moth.

“Holy shit!” Henry said. “Guess I brought this gun for nothin’!” He clapped like a trained seal. “Killed it real good. Real good.”

I wept. There was nothing good about what I’d done. No matter how it had sustained itself, it was a helpless creature when I ran across it and it deserved…what? What did child predators deserve? And did it matter how they manifested themselves into the world?

If there was a sign, that meant others knew about the fairies, but did they know what they were really after? Wiping my eyes, I turned to Henry, surprised to see him crying also.

“Went through the same thing,” he said before sniffles. “They’re so damn pretty.”

We embraced for an instant before Henry’s macho rustic instincts kicked back in. It took a few moments for him to get himself under control.

“When I said I got all of them except that last, I was kinda talking outta my ass. Truth is, I don’t know for sure if there’s more in this forest. Just ‘cause I ain’t seen them—“

Henry nodded solemnly. “And if they find themselves another dumb-shit like me to bring them kids…”

He didn’t have to finish. We both understood what we needed to do. And it’s what we’ve been doing ever since. Of course, over the years we’ve sort of branched out. We learned there are people who willingly cooperate and that doesn’t sit too well with us.

So, tell me now, friend. Are you going to take that kid of yours and turn around or are we going to have to show you exactly how we’ve branched out?

The road home is back that way.