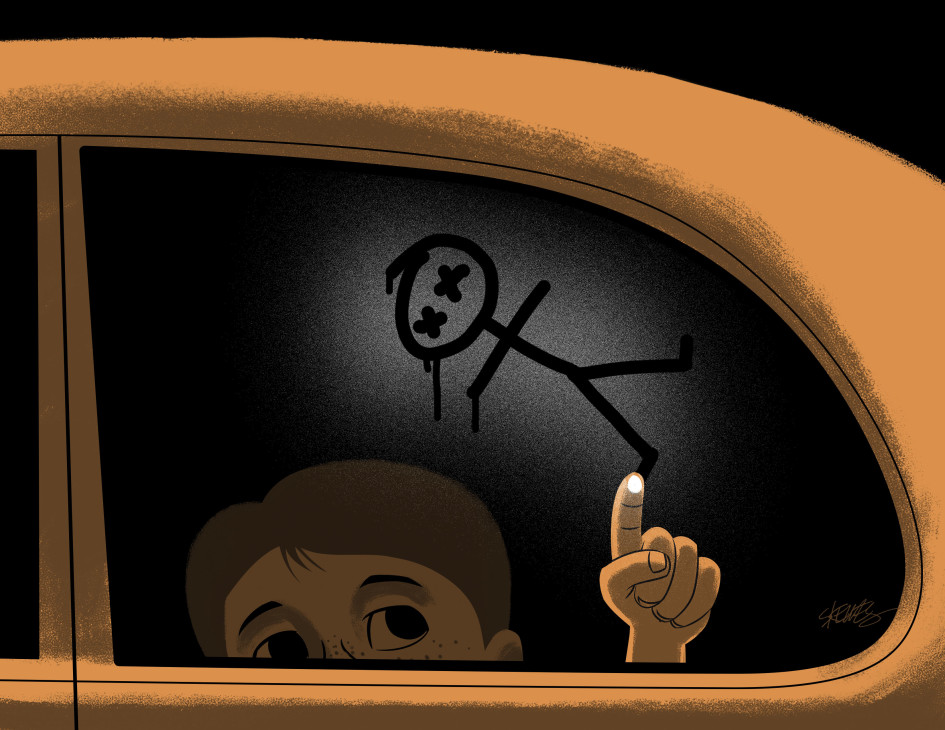 “If I killed somebody, I’d hide the body right … there.”

We all looked out the window, at where Jeremy was pointing–a big mess of buttonwood trees sticking up out of the swamp, right next to the highway.

“Too close to the road,” said Petey.

“That’s why it’s perfect.” Jeremy stared out the back window of the Buick, trying to keep his eye on the spot. “It’s right under everybody’s nose, but who’d go in there? Nobody would. Absolutely no reason to. The body’d never get found.”

Petey thought about it for a second. It never took him more than a second. “What about if there’s an accident?” he said.

“A car wreck. Say it’s raining like today. Somebody spins off the freeway.” Petey blew some fog onto the window and started etching Jeremy’s name in it, using his pinky finger. “They wreck and don’t stop spinning till they’re a hundred feet into the swamp. They end up right next to your body. They find it. BLATT!” Petey swiped Jeremy’s name clean.

Jeremy looked at me, like I was supposed to argue with Petey about it. I kept my mouth shut. So did Coin. Getting Petey Marsh on your bad side was always a mistake, but especially so when you were in the back of his dad’s Buick and playing “Hide The Body Here.” Petey had invented the game. He was the expert.

“Your turn,” said Petey, punching Coin on the knee.

Coin hunched himself up on the seat like a vulture. We called him Coin because that’s how his name was spelled in the newspaper one time. They’d left out the “l” in “Colin McQueen.” It was in a story about how his dad had gotten arrested for having a Kel-Tec P-32 pistol in his car when it was being inspected.

“If I killed somebody,” Coin said slowly, squinting at the mole on the back of Mr. Marsh’s neck, “I’d hide the body out at the junkyard. In one of the old washing machines.”

“BLATT!” Petey shook his head. “Somebody looking for washing machine parts would find it.”

“Not if there was a car bashed up against the machine.”

“Doesn’t count. Has to be one thing. A car and a washing machine is two.”

Coin turned away and started clicking the armrest ashtray. Petey made up new rules and changed the old ones whenever he wanted. He always made it so he was right. Always. He’d never been wrong, ever. I don’t even know why I kept playing, but I did it just the same.

My turn. I was better at this than Coin or Jeremy were, because I didn’t care as much as they did. I knew there was no way to win. That’s why I always just said the first thing that popped into my head.

“If I killed somebody,” I said, “I’d hide the body down a septic tank.”

Petey thought about it for a second. A good septic tank never has to be cleaned. I knew that. Petey did, too. For a minute I thought I’d really stumped him.

“What if there was a septic tank explosion?” he said finally.

“Then the body’d be exploded, too,” I grinned. A septic tank really would be the perfect place. “Nobody’d know it was ever a body,” I said.

“Maybe.” Petey puffed more steam onto the window and started poking bullet holes in it. “What about the teeth, though? The teeth could still be identified.”

“You crack all the teeth out before you hide the body,” I said.

“Absolutely,” said Jeremy, beaming. “And you put ’em all under some little kid’s pillow.”

Petey looked at us like we’d just told him to eat his shoelaces. He glanced up at the rear view mirror, trying to catch his dad’s eye. Mr. Marsh was watching the road. Petey looked over at Jeremy’s dad. Mr. Connerson was busy folding up a map–he got it about halfway closed, then gave up and stuffed it into the glove compartment. He slammed the little door shut with a hard snap. Petey turned back to us, like that meant something.

“BLATT!” he said, imitating the sound.

So. A septic tank wouldn’t work. Not according to the expert. I figured as much. Jeremy looked at me, like he thought I was right and should start something about it with Petey, but I kept my mouth shut. You couldn’t argue with Petey Marsh. I knew that. He was always right. You can’t argue with somebody who thinks he knows everything.

We stopped for gas, and Mr. Marsh said he’d treat us to sodas, so we all went over to the Dr. Pepper machine. Petey didn’t look at me once. Mr. Marsh put the money in, and we each chose what we wanted. I pressed “Orange Crush.” After some cranking that sounded like a ten-speed shifting gears, the can came out at the bottom. Petey picked Dr. Pepper. He reached down and got his dad’s soda, too, because Mr. Marsh has a bad back and can’t lean over. Jeremy took a Mountain Dew back to his dad, in the car. Mr. Connerson is about seventy years old and can’t move around very much.

When we got back onto the road, we drove along a golf course half-submerged in tidewater. Nobody was saying much. Everybody concentrated on their sodas, acting like they were drinking from them even after they were empty.

Jeremy finally looked at Petey. “What about you?”

“You’ve had plenty of time to think.” Jeremy moved his can up near his face, using it like a shield. “Where would you hide the body, if you killed somebody.”

Jeremy wasn’t being smart, asking Petey that. It wasn’t a bit smart. Most people focus on your eyes when they look at you. Petey always looked at your eyebrows. If he was mad at you, he’d look at your forehead. After Jeremy said that, Petey looked at my scalp. He looked at me like he’d never seen me before. I looked back at him like I’d never seen him so rattled before–which I hadn’t.

Petey coughed onto the window. “If I killed somebody,” he said, “maybe it’d be one of you.” He etched a question mark into the smoke and looked back at me, smiling a droopy grin–his clown imitation. “None of you weighs much,” he said, “so I’d hide the body up under the ceiling panels in somebody’s basement.”

Good answer. There’s no reason for anybody to go looking up under ceiling panels. Especially in a basement. There’s no point.

“But what if a pipe breaks?” said Jeremy, stupidly.

“You hide the body away from the pipes.” Petey sounded like a math teacher going through flash cards extra-slowly. “Way in the corner of the basement.”

“Well how about if there’s an earthquake?” Jeremy never knew when to stop.

“Absolutely everything caves in.”

Petey grinned sadly. He turned and looked at me–at my eyebrows. He was back to normal. Back in control. He squinted. “Wouldn’t that be just another earthquake death, then? Anthony?”

I didn’t say anything. Jeremy had gotten me into this, like an idiot. I noticed he wasn’t saying a word to help me out.  I was ashamed at how stupid he was, and Petey knew it. Petey enjoyed it. He smiled at me like I was a gerbil.

I upended my soda can. Petey was the winner. An orange drop hit my tongue. I gulped it down, feeling like an elephant eating half a peanut. Petey was the expert. Up under ceiling panels was the best answer. It really was.

We bounced onto a muddy dirt road.

Mr. Marsh drove up the long gravel driveway of a farm house. The tires crunched and splattered to a stop. Mr. Connerson told us to watch out for puddles as we got out.

He stayed in the car.

We went around to the back of the house. Petey walked ahead of us, staying right with his dad. He was acting like he was in charge, as always. He looked back at me once, but I wasn’t looking at him. Then he looked over at what I was looking at–a Frisbee full of bullet holes hammered to a tree trunk–and turned back to the house.

When we got to the back door, Mr. Marsh took out an envelope and tore it open. Then he slid a key out and unlocked the door with it. We all went inside, to a kitchen.

Nobody was in the house. Mr. Marsh didn’t turn on the lights. He opened a door next to the refrigerator. He knew his way around. We followed him through the door and down some narrow steps. We went single file–first Petey, then Jeremy, then Coin, then me–to the basement.

Mr. Marsh switched on the lights. He led us over to a plastic trash can lid on the floor. He picked it up. Underneath was the open mouth of a septic tank.

I laughed in Petey’s face.

We went back out to the car. Petey wouldn’t look at me. Mr. Marsh opened the trunk, and Jeremy and I wrestled the body out onto the gravel. I grabbed the left leg, and Coin took the right. Jeremy and Petey each took hold of an arm. We started dragging the body around the side of the house.

Everybody looked at the dead man’s face except me. I was looking at Petey. He didn’t look too happy.

I smiled. Petey still wouldn’t look at me. He looked down at the body. He watched the dead man’s head carve out a long puddle in the grass. He didn’t look like the expert anymore.

Because I was, now.

Tom Lavagnino is a playwright living in Los Angeles. He is a graduate of NYU and AFI, a former editor at 5th Street International Poker Magazine, and co-wrote the 2015 feature film Home Sweet Hell for Darko / Sony Pictures Entertainment. He wrote Children of the New Moon for issue 1.

Have a comment? Leave it on the Editor’s Page.