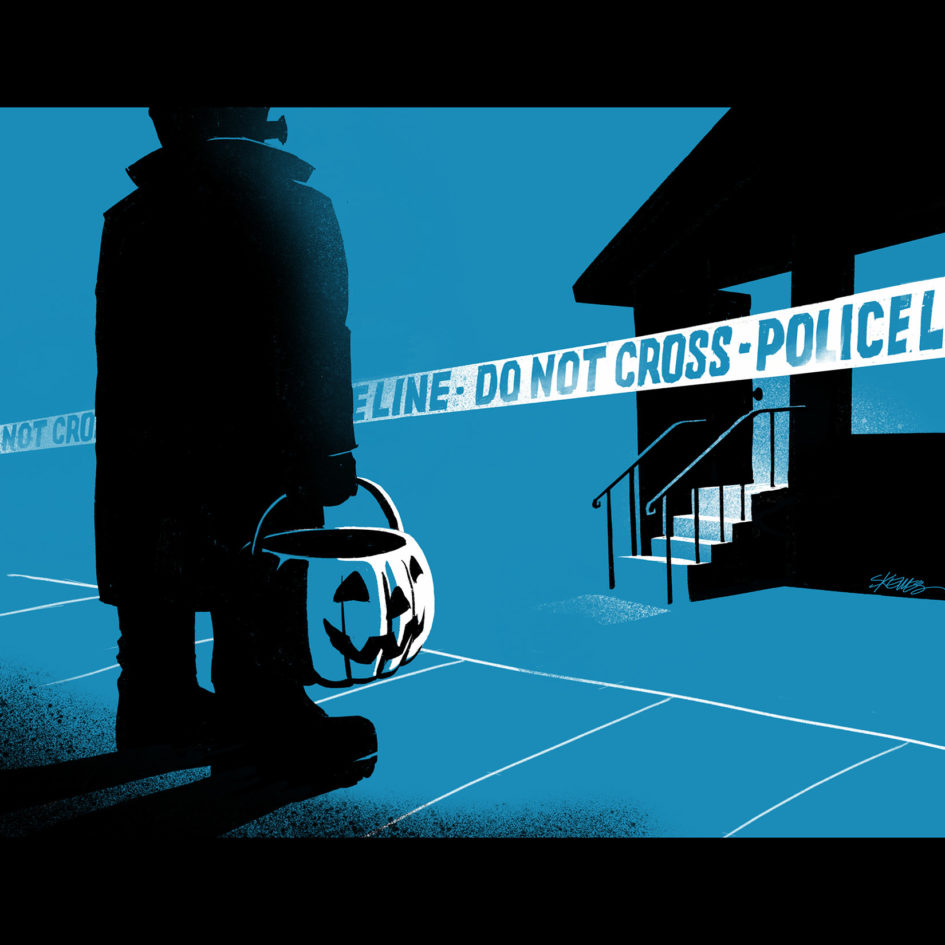 I had been preparing for weeks; months if you count the myriad gruesome drawings haunting my ever present sketchbook. That black, bound codex was my shield against taunts and bullies, ape-ish jocks and unimaginative, authoritarian teachers that populated the terrifying trenches of my junior high school.

At a moment’s notice, I could escape inside those well worn covers, to take refuge in an achingly pure, snow white page and let my dark imaginings pour forth through pen or pencil. School had resumed for only a couple of months now and already almost half of the empty pages were populated by a series of gruesomely empathetic monsters and lonely, misunderstood crepuscular creatures.

Like a junior Dr Frankenstein, my imagination had birthed an unspeakable menagerie into existence; reluctant horrors, whose purpose in life was to keep me distracted from the everyday terrors of my world. My lovingly rendered monsters each wore beautiful armor, of particularly disgusting repugnance, and bore the unbearable in my stead.

Part Basil Wolverton wormy crater face, part Big Daddy Roth drooling, bug-eyed Weird-oh. A gallery of Dorian Gray portraits decaying in close-up shocks in a Technicolor, Hammer Films double feature. Like me, these friendless loners cringed under a constant, threatening scrutiny; but I endowed them all with the innate survival superpowers I lacked.

It was 1972, and I had somehow made it through the previous year’s transition from an orderly and controlled life on the military base where my father was stationed, to a crash-course Lord of the Flies existence in a 7th grade public school once he’d left the service. The monster mania of my 1960s childhood was my protective bubble in this new, unruly world, and Halloween my high holy day.

Previous sketchbooks were filled with intricate plans for each final night of October, when I would convert our garage into an appropriately festive Chamber of Horrors and feature various monster busts I had been modeling onto Styrofoam wig heads with clay and enamel paint.

Spooky sounds would play from a cassette recorder hidden beneath a picnic table. Fans would blow orange and black streamers into the faces of trick-or-treaters as they walked on lumpy sleeping bags past a menacing prop guillotine blade, or a film projector casting shadowy 8mm Castle Films monsters onto a billowing sheet, or a giant rubber spider pouncing down on a string. Of course, I would always be lurking in a dark corner to jump out at the end for a final big scare, resplendent in whatever detail-obsessed monster costume and greasepaint make-up I had conjured up that year.

I would helm my haunted Fun House until most of the local kids had screamed their way through, and then I’d grab my treat bag to run up and down the residential streets rising on our hillside suburban development, collecting as much candy and savoring as many grimacing jack-o-lanterns as I could before the Witching Hour hexed the fun away for another 364 long, nearly unbearable days.

Pondering over sketches of all the creeps and critters, corpses and coagulating experiments-gone-wrong that I had breathed life into since my recent back-to-school daze began, I decided this 8th grade year to transform into a laboratory side-kick gone very wrong: stitched together by some insane doctor from discarded chunks of Ygor, Renfield and Lou Costello.

I spent most of recess (and half of math class) on Halloween morning putting the finishing touches on a concept drawing that would guide my transformation that evening. The suicide by hanging scene in the garage got its finishing touches after school (right after an especially spooky episode of Dark Shadows).

Following a gobbled dinner, I donned a hump (an old plastic army helmet) and a festering broken neck (hunks of Kleenex soaked in liquid latex). I worked soft wax into a row of hideous fangs in desperate need of an orthodontist. One of my eyelids was painted pale yellow, so that when I shut it tight it looked like a pupil-less pool of soured milk. The other eye was sunk into a deep purple bruise, edged with weepy magenta.

One eyebrow was erased with wax and the other styled into an overgrown tumor of spirit gum and crepe hair. I also glued a jagged rubber scar (mail-ordered from Captain Company) onto my forehead, then haphazardly zigzagged bits of black thread dipped in Elmer’s Glue to create suitably ragged stitches. A drop of blood here and there, some baby powder to whiten my hair, and a ghastly boil or two erupted on my adolescent skin.

The day before I had already crafted the “piece of resistance” for my get-up — an oversized mad lab screw bolt fashioned from a wooden thread spool, spray painted silver and Magic Markered with a spiraling thread on its shaft. That groovy ghouly screw now got gummed onto my temple, seemingly impaled into my skull thanks to a radiating web of finely painted cracks — a final, comic detail for my best Halloween costume ever!

I closed up the garage a little late that night as there had been a steady stream of neighborhood children (some coming back for seconds in my house of horrors). I always felt really chuffed when kids that wouldn’t even give me the time of day at school went spilling out into the night breathless from the spooky chills I had gifted them.

As soon as I slammed down the sliding door I took up my candy bag and shuffled down the now-nearly-empty street, house-to-house wherever a light was still shining, across the main avenue, and then up the next road as it ascended back up the hill.

About half way up the darkening lane I came upon a home I hadn’t remembered ever trick-or-treating before (the mailbox said Lewis), but decorations still glowed and a flickering pumpkin hadn’t quite burned itself out, so I hobbled up the front steps, dragging one dead foot dramatically, and rang the bell.

“Trick or treat,” I croaked in my well-practiced broken neck wheeze.

As I pushed my candy bag forward on crooked arms, snarling my raggedy toothed grin, the man at the door leaned his hard face into the porch light and eyed me.

His face was icy cold.

“Thirteen,” I replied, free-falling out of character.

“You are too old to be doing this childish stuff. You should be ashamed of yourself!”

My arms went limp and my hunched back uncurled.

I went home the fastest route possible, via a scrubby short cut that bridged the ravine that ran down the hillside and divided the neighborhood like a deep scar. I don’t remember much of the flight home, just the deep shame burning on my cheeks as I scrambled through the brush. I ripped off my shirt and demolished the make-up from my face.

I don’t remember jumping in the pool, but I was dripping wet as I snuck in through the back door.

I lay in bed not able to sleep. It was some time past 10 p.m. when I heard the sirens.

The phone rang shortly thereafter and the door to my room cracked open and closed again. A neighbor, Mr. Araki by the sound of his voice, had showed up and I could hear him murmuring excitedly with my parents. I quietly crept out of my room and down the hall so I could eavesdrop on the den where they were whispering. I heard my mother repeat, “Murdered?,” before being shushed by my father so as not to wake me up.

In the morning, I still had not even bothered to look into my candy bag to count the loot — a ritual that normally occurred first thing after returning home. I still felt sick to my stomach. Ashamed. And ruined.

On the bus to school, every kid was chattering at top speed about the murder last night. Instantly legendary.

“Mr. Araki took his two kids, the youngest kids, trick-or-treating late in the evening late because he had worked very late or whatever and he found the door at Mr. Lewis’s house wide open he called out “Dave, Dave” and stuck his head inside and that’s when he saw the body by the TV, its feet and hands all hog tied up with electric cord from the string of plastic pumpkin lights that were still blinking Mr. Lewis’s mouth stuffed full with candy corns and Milky Way bars gross and more candies throwed across the floor and the witchy straws of a broom sticking out Mr. Lewis’s mouth the handle shoved down his throat in his guts: double gross. Both of Mr. Araki’s kids barfed in their masks.”

By the time we all arrived in Miss LeHardy’s home-room, another classmate had smuggled in an article from the morning paper which was being passed around behind our teacher’s back. When it came to me I read every word twice…

“…ruled death by asphyxiation. Police are appealing to those in the community to help identify a possible motive in the killing, as well as identifying two items found at the crime scene: a gag novelty rubber wound and a silver color wooden spool that had been pushed into the eye sockets of the victim.”

My cheeks flushed. Clues! I loved clues. I had devoured each story in Alfred Hitchcock’s Solve-Them-Yourself Mysteries – almost as fun as the monsters roaming my imagination. I was smart. I could be really good at puzzling out real-life monsters!

So I started a new career as a detective that day and vowed, like a junior Sherlock Holmes, to stay one step ahead of the police and their inept quest to find the Candy Corn Killer. I’d begin by writing down everything I’d heard so far and draw the lay out of Mr. Lewis’ living room while it was still fresh and raw in my memory. I reached for the sketchbook lying under the seat of my school desk and flipped it open to the next blank page, just adjacent to the lovingly detailed portrait of my final All Hallows’ Eve creation — its twisted grimace, that jagged scar, the screwed brain — now looking forlorn and bereft of any pleasure, all powers to protect me spent.

I felt an icky knot in the pit of my stomach – one that would not dissipate in the years to come – tighten involuntarily into a clawed fist.

No matter the delicious thrill of mystery that now lurked in my soul, Halloween had lost its innocence for me.

John C. Goss is a monster kid who grew up to become a multi-media artist, designer and writer. More about his work may be found at www.siamorama.com