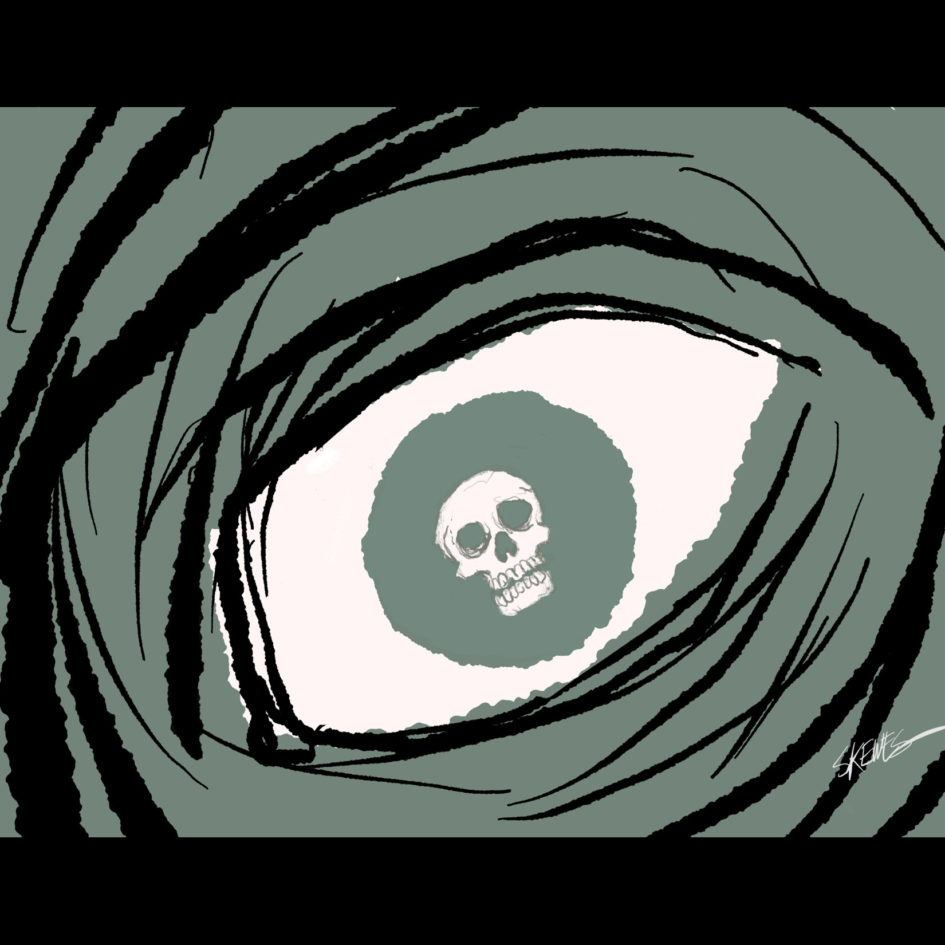 I tell Amelia we don’t use them anymore. “They’re bad for us.” And she looked back down at the alphabet cards in her hands.

Outside the beechcraft’s window, bed pyres burn below like little mushrooms pressed into the town of some city. Huddersfield, maybe. Leyland. Preston. Who knows? God cracks open the clouds long enough to throw light upon a small clearing. Hits the landscape before me like a guillotine. At this altitude, most things seem normal. I check the fuel gauge.

Hands tighten around the yoke. Turn around with a smile. Turn. Face feels numb. Amelia is strapped in the passenger seat. On her lap are the cards. The ear protectors seem comically oversized on her small head. I forget she’s only three years old.

“Are you tired, sweetheart?”

Amelia lowers her head and begins shuffling through the cards. Looks up, once, to see if I’m still looking. I catch her eyes.

Sarah and I honeymooned in Fiji. Took a small aircraft similar to the beechcraft over Monuriki Island that formed part of the Mamanucas. God and the birds could gaze at that island and never understand the affect its beauty had on me that day. Remembered it for years, and found it again in my daughter’s eyes six months after she was born.

I return to the vista of horary clouds and turtle shell patches of life below. A notepad vibrates on the flight deck controls. Handwritten notes tell me the rotational speed of the earth at the equator is 900 knots. Decreases in knots with the cosine of the aircraft’s latitude. There’s a formula to chase the sun. Formulas for everything. If the aircraft is 60 degrees north or south then the rotational speed of the earth is 450 knots. For most airliners, that’s well within their scope. Factor into account the tilt of the earth on its axis and an airliner would need to incline its path of flight in reference to the orbital plane around the sun.

The beechcraft I stole from Barton airport has hardly any speed, and the only formula I have is one written by an old aviator who had a gun pressed against his head. The laymen’s version is, keep the sun on the horizon and hope God’s breath pushes you toward it.

News report. The world record for someone staying awake: Tony Wright, 42, from Penzance. He beat the 264 sleepless hours set by Randy Gardner in the US in 1964. 11 days. That’s the record. My wife managed 3 days. Amelia is at 4. To a kid, 4 days beats Mr Wright’s record by a mile. Amelia’s a tough cookie. Dropped all carbs from her diet the first day. Added caffeine in the second. Had to beat a man to near death for ground coffee when the looting began. Hysteria was a virus. Descended quicker than night.

Starbucks sales went through the roof. Energy drinks were sold out in hours. By the third day, drug dealers were peddling caffeine pills and shots of adrenaline. Bags of speed and coke tripled in price. Everyone on the planet became a junkie overnight.

Modafinil is gold. The rich and famous were peasants compared to the wealth of the simple narcoleptic. Someone leaked a list of addresses. A disgruntled nurse, they think. Got out on the Internet. Every narcoleptic’s house was raided for modafinil, or any other drugs used to keep awake. Didn’t matter that their stinking corpse was rotting in front of the television set.

Darwin was right. Those that adapt to change the fastest have a greater chance of survival.

Drive. That’s all you can do. Keep moving. Leave the house. Leave possessions. Looters will get it all anyway. Beds lay burning at the end of the drive way. Windows smashed. Coffee, prescribed drugs, whatever it is, they’ll kill you for it. Used to be if a man wanted another man dead, he would buy a gun. Now he pours cough medicine down their throat.

Night holds a scythe. Depression, dizziness, hallucinations, irritability, nausea and loss of memory. These are the symptoms. Before me clouds are white monsters chasing each other through the sky. Amelia’s voice floats over me as though uttered from the mouth of a long-standing gargoyle perched upon the ledge of a church.

Flying home from the war zone in World War II, pilots with sleep deprivation would crash their planes. They survived a war to lose their life to a lack of sleep. Amelia helps us both. To know that C is for cat means I’m still awake. And she is too.

Sarah was diagnosed with ME three years after we met. Along with babies, the sick, the coma victims and narcoleptics, ME put you most at risk. We tried. But she needed sleep. I took her to our bedroom and held her for forty minutes. Listened to her breathing taper to a slow whisper before disappearing forever. Her skin warmed my tears as they fell to her cheek. Then everything went cold. Made dinner for Amelia and that was the last meal we had in the house before I drove us to the airport. Passed people in the street stripped naked, hoping the cold would keep them awake. Saw groups fighting. Hitting each other in the face.

Amelia nearly fell asleep that night. Had to open her eyelids with my fingers. She cried for forty minutes. When she was teething, or had colic, I would hate her crying. Now, I wish she’d cry all the time.

Doctors are working on the cure. Those doctors still alive, that is. Governments are going to work together to distribute vaccines, once they’re available. Instructions given are to stay awake. Stay awake and stay safe. The world is burning and they fall to clichés.

Head north. Follow the sun. If the beechcraft makes it over the Atlantic I’ll hit Canada in eight hours.

The horizon is a miasma of dream. Ghosts float through its skin and beckon me with snake-like arms. Wipe my eyes.

Angels breach the skyline, dressed in rags, hair of seaweed. I peer below toward the shifting lands and the pastures and meadows blister like skin pressed against a hot skillet. From the fissures great plumes of smoke descend toward the beechcraft and from the haze a vast hand appears. Reaching.

I throw the yoke to the right and the plane tilts with such speed it feels as though God himself has pushed us to one side. Amelia cries and the engine of the plane follows in anxious accord. Air currents form an invisible maze. Up. Down. Right. Left. The beechcraft is a mouse in nature’s laboratory and from the side window the hand envelops the aircraft. Darkness. For a moment. I turn to Amelia.

A deluge of tears fall. I see all her back teeth. Each one born into a screaming mouth. Each one, a night of agony. Walking the nursery floor. Lullabies. Soothing gel. Each one, milky rocks of misery.

The plane bumps against air pockets. Panels creak. Seats rattle. The engine roars like the lion with the thorn in its paw.

Descent. Clouds turned into jellyfish swimming against Katabatic winds. The yoke shudders in my hands. Nose dips. Through murky tentacles the tailwind pushes us downwards. Breaching the underbelly of the clouds I see a rutted landscape of verdant hills and valleys.

Silence. A memory: Sunday afternoon, last summer. The top of Blackstone edge, a gritstone escarpment 472 meters above sea level. Sarah and Amelia sit look out toward Hollingworth Lake. Amelia points to the flanking hills and I tell her a story. Before the first tick and tock, giants rambled the flatlands of earth. They lived in harmony. But the world began to get small. Or maybe the giants got bigger. They needed space to grow. The sky was getting too close to their head. The shoulders of other giants too close in the night. Social boundaries were breached. Politeness and harmony was exchanged for bitterness and anger. They began to fight and every evening the world shook as each fell to the ground. Days and months passed. Only one giant remained. And he, too weak from fighting, lay down too. Years ushered in cruel seasons and upon the giants’ back grass and moss formed. The crevices of their armpits filled with peat. Their nostrils collected rain water. And what we know now as hills, tors and mountains, are really the backs of felled men too big to share the world.

G is for giants.

The noise of the engine snaps me back into the cockpit. 100 feet. 50. 25. The wheels touch a giant’s back and the small aircraft bobs its nose like the beak of a curious duck. Brakes. Slide. Loam collects and forms primitive chocks. The aircraft breathes one final time before retiring. Wind arrives around the windows, its breath labored as though our descent had held it in shock. I turn to Amelia.

Cards lay strewn across the cabin’s floor. H is for hat. V is for violin. Q is for queen. Her head is tilted to one side. Ear protectors look more like a futuristic neck brace. Eyes are closed tight. A candle wax tear of blood pools in the ravine of her pale lips.

I undo the belt. Scrabble over the chair. I raise her head, wipe her mouth. I shout her name again. Feel her pulse. Beat. Beat. Beat. A tough cookie. Using my thumb, I press her fingernail and her eyelids flutter.

Those tropical islands reveal themselves again. Her brow buckles. She cries. The salt water taps my wrist is quick succession. I feel her tiny heart beat against mine and for a moment, all is well. The adrenalin is assuaged. Worry turns to relief. We hold each other for a long time. Or maybe no time passed at all. Her sobs become lost to the cotton of my shirt. And mine to her silken hair.

Beyond the window, the sun scurries behind the hills. The chase is over. A bluish veil washes over the sky. I undo Amelia’s seatbelt and I lift her. We exchange positions. She now sits on my lap and I rest on her seat.

Upon her arm my finger strokes the skin. Nose and lips touch her crown. Shadows wander by the small windows like ghosts peering in. Amelia’s chest contractions fade and she settles.

I shouldn’t, but I say, “She’s coming, sweetheart.”

Light fades on the horizon. The fleeting blink becomes long-lasting. The world of giants before me, yawn. Stretch their backs.

From her hand the last card slips to the ground. S is for sorry.

Craig Wallwork never sleeps so spends most of his time writing. You can find his stories & books hiding in every darkened corner of the world.