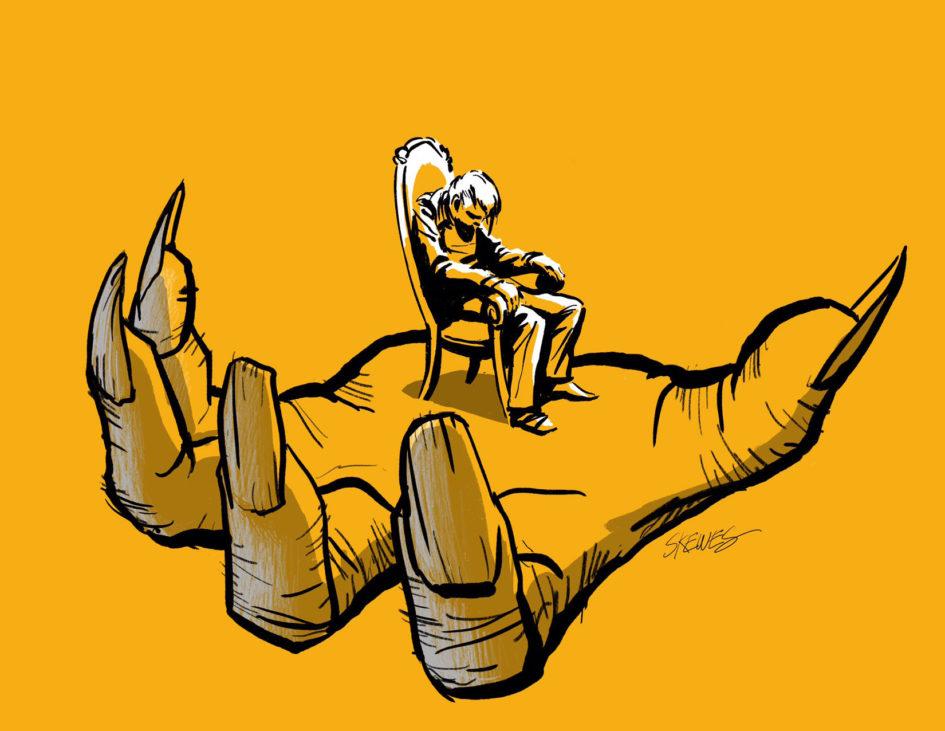 “I think it’s time we talk about the voices in your head.”

She said it just like that, raising her eyebrows and pursing her red, over-lined lips. She managed to say it matter-o-factly, as if she actually believed someone who heard multiple voices in their brain on a daily basis could be a reliable witness to their own insanity. When I didn’t answer right away, the woman uncrossed her legs, then re-crossed them the opposite way. I saw she was wearing white panties underneath her skirt, but she acted like I hadn’t looked.

“Charlie,” she said, tapping her foot to an unknown beat. “Do you know where you are?”

I looked around the room. There was a large desk to my left, with an iron, a-frame base and a glass top. Half a dozen framed certificates hung behind it on the wall, situated between two floor- to-ceiling windows with closed blinds. A single lamp illuminated the room.

I realized I had no idea where I was or how I’d gotten there.

“I’m Dr. Megan Goldman.” She pointed to the name tag on her white suit jacket. “I’m a psychiatrist. You’ve been seeing me for several weeks now. We’ve talked about your addiction to PCP and prescription opiates. About how you’d recently moved onto heroin. And how, for the last three weeks, you’ve been clean.”

“Clean?” I choked. The words sounded hollow and strained. I didn’t even have a job; how could I pay for a psychiatrist? And I certainly hadn’t been clean a single day of the last eight months.

“Clean, Charlie,” she repeated. “Look at your arms. What do you see?”

They were resting, upturned, on a simple wooden chair with arm rests that curled at the end like rams’ horns. Like I was waiting on an IV. There were no track marks. I squeezed my fists and watched the muscles on my forearms bulge as the healthy veins filled with blood. I looked up at Dr. Goldman, who saw the confusion written on my face.

“You don’t remember any of it, do you? Charlie, you need to answer.”

“No, no, don’t be sorry. Memory loss is a consequence of heavy drug use. I’m just disappointed that you’ve forgotten your recovery.”

Recovery. The word echoed in my head, spoken from a different world. Had I really recovered? I placed my right hand on my chest, feeling the dull thump of my heart pumping exactly as it should, without flutter or hiccup. My fingers trembled.

“I’m extremely proud of you, Charlie.”

I studied Dr. Goldman’s face. She did look familiar somehow. Maybe I’d blacked out for the past several weeks. It’d happened many times before, but never for that long. I thought about my family, wondering how they’d react to hearing I was clean. I could feel my feet bouncing up and down, cushioned by the plush carpet beneath them. I wanted to call my sister. I hadn’t talked to her in such a long time. Why had it been so long?

“Um, Dr. Goldman, is there a phone in here? I’d like to talk to Claire. Her number should be in the phone book.”

“In time, Charlie. First, you need to take your medicine. And then you need to answer the question I first posed to you. About the voices.”

I didn’t remember telling her about them. Telling anyone, for that matter. Just thinking about them sucked all the moisture out of my mouth.

“Here you are,” Dr. Goldman cooed. A single, blue pill sat in her outstretched palm. In the other hand she held a tall glass filled three quarters of the way up with water. No ice.

Before I could extend my arm, something strange happened. Dr. Goldman started to change. Her head elongated as her eyes moved to either side of her face. Her mouth opened wide, displaying a pulsating red rim which encircled dozens of small, sharp teeth. A lamprey—that’s what she looked like. Her necked snapped towards me with the speed of a rattlesnake.

“What’s wrong, Charlie? Did you see something? Are you hallucinating again?” Dr. Goldman’s head shrunk back again and her eyes migrated to their proper positions on her face. Her red lips pouted. “I think it’s time for your medicine.”

I squirmed, but my arms refused to move. Dr. Goldman dug her fingernails into my cheeks until my mouth shot open, then shoved the blue pill inside. “Drink up,” she directed, forcing my head back and pouring most of the water down my throat. The remainder rained down on my body, soaking my shirt. It felt like ice.

“I, I think I want to go now,” I stammered. “I’m…not supposed to be here” I felt like I was unraveling.

Dr. Goldman’s laugh filled the room, raspy and mocking. I hadn’t noticed before, but her teeth were yellow and crooked.

My eyes widened. “I want to talk to Claire!” I shouted. “Please let me call Claire!”

“Oh, Charlie,” she whispered. “Don’t you remember? You killed your sister. Claire is dead.”

The flood of memory came crashing in.

I blinked my eyes and was back beneath the overpass again. It was dark and I could hear the wind whipping between the concrete supports. Several fires flickered in the distance. Old Meg sat in front of me, her face illuminated by the small fire we’d lit in a metal trashcan. The dirty and torn doctor’s coat hanging from her thin frame bore a name stitched in thick blue thread: Dr. Goldman. She’d scavenged it from a motel dumpster several weeks prior after a date with one of her johns and hadn’t taken it off since.

The metal wire that secured my arms to the chair was cutting into my wrists. The chair with the arms that curled like rams’ horns. A furniture store had tossed it out after a fire scorched half their merchandise. I saw my healthy veins were bruised and black again, my forearms pock-marked with sores. I was so weak I could barely make a fist.

“You killed Claire, Charlie, don’t ya remember?” Old Meg was saying. “1994 Ford Taurus, right into a telephone pole. Smashed her head in, ain’t that what you said?”

My eyes filled with tears. She was right; I’d killed my little sister after a night out drinking and partying and I’d done a year in prison for manslaughter. That’s when I started the heroin.

“That musta been some good shit!” she cackled. “Your eyes were rolled back in yo head! Talkin’ about a lamp-shade or somethin’.”

She tsked, standing up and limping toward me. She smelled like spoiled fish and mold. “Not a soul to hear, ya dumb junkie. That old van with them meals came by, all the vagrants is gettin’ their food for tha week.”

She reached down toward the overturned bucket beside me and pulled something into my view. It was a needle filled three-quarters of the way up with a dirty brown liquid.

“Don’t Meg, don’t. I’m clean!” I struggled against my bonds, but the wire just cut further into my flesh.

“Clean? That angel dust musta really did a number on ya!” she laughed. She moved a step closer.

She paused, the needle inches from my right arm.

“Do I gotta tell you again? Them voices, dummy, remember? You heard ‘em when you was high. And right after, you found that five dolla bill in that old pair o’ jeans them people brought. So I thinks to myself, Meg, maybe them voices told him where that money was.”

Without a word, she leaned over and buried the needle into the only vein in my forearm that hadn’t collapsed. I felt the fire crawl slowly up my arm and into my heart. I was done fighting.

“Says you,” she mumbled. “But I’m gonna see for myself. You’re gonna be spinnin’ in a sec. Maybe then you’ll tell me about them voices.” She held the needle close to her face, inspecting it. “That’s a big ol’ hit, Charlie. Shouldn’t be enough to kill ya, but I’m sorta hopin’ it does.”

She tossed the needle and smiled, decaying teeth protruding between her cracked lips. “That jacket you got hidden in your sleeping bag looks mighty warm. Specially on a night like this.”

Max Shephard is a Mississippi attorney, entrepreneur, and author who prefers his coffee black and his fiction dark. His debut novel The Client, a paranormal mystery about an attorney with the Devil for a client, is coming soon.