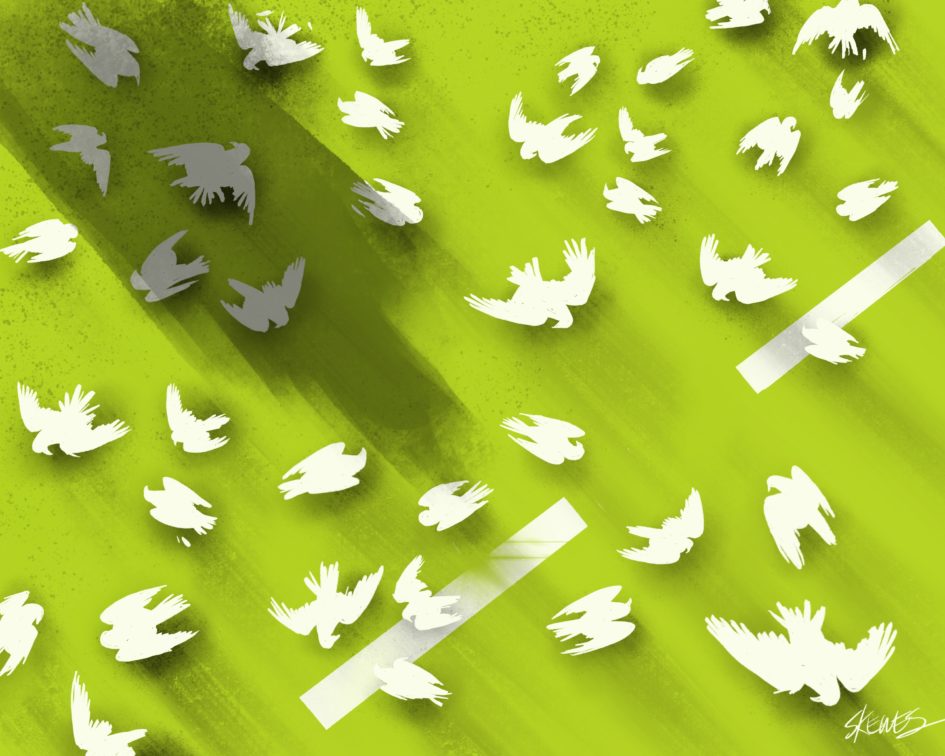 Three hours after every single pigeon in Memorial Park died simultaneously, a crowd, mostly tourists, had gathered around the fountain in the center of the park, pointing, taking pictures, and looking generally confused. There were some locals mingling about as well. Barney Goodman, who owned the appliance repair store across the street, was there. So was Edith Christensen, who’d been power-walking down Main Street when she’d heard the commotion. And more were filing in by the minute.

“I’ve never seen nothin’ like it,” Barney said to no one in particular, clutching his faded ball cap in one hand as he ran the other through his thinning hair.

Similar sentiments were heard throughout the park. Why are they all dead? What’s wrong with their eyes? Can global warming affect pigeons? Is someone gonna call Animal Control?

One man, a gnarled octogenarian wearing cargo shorts and combat boots, prodded one of the dead birds with his foot.
“Dazed, I say,” he commented to his wife, who adjusted her glasses and nodded.
The birds weren’t dazed, though. They were very certainly dead.

City officials reviewed the surveillance footage from Goodman Appliance & Repair the following Monday. The video was grainy, which made seeing what happened in the park almost impossible. However, one of the old oaks at the front of the park had an enormous limb which hung half way out above Main Street. At exactly 3:34 a.m., every single pigeon sitting on that branch toppled from its perch and landed with a dull thud in the glow of the streetlight below.

“Sonofabitch,” Dan Blackwell had stated while the other four men in the room sat in dumbfounded silence. “Would you look at that shit.” Several days later, the mayor would get word the same thing had happened in Grant’s Crossing, which was just across the river, and in several other small towns scattered across the country. All at exactly 3:34 a.m.

Of course, Benjy McAllister, who stood at the entrance to the park opposite Goodman’s (which was right across from his house), didn’t know any of this. The wonders of the world—and terrors too, for that matter—outside Coles Creek, Mississippi hadn’t been revealed to young Benjy just yet (he should have been isolated from such terrors in that sleepy little town, but the world was changing fast).

Benjy just loved animals and wanted to know why there were four dead birds lying on the brick steps leading up the hill to the park.
Benjy took two sticks and pushed one of the birds from the second step onto the sidewalk. The bird landed face-up, its black eyes bugging out of its head. Benjy dropped the sticks and tumbled onto his back as if he’d stuck a bread knife in a socket. He also dropped the f-bomb, but he never told his mother that part.

When he heard the hubbub coming from the park, he climbed the steps to see what was going on. Dead pigeons were scattered everywhere—at least a hundred of them, he guessed—all cold and unmoving beneath the shade of the old oaks. He felt a chill in the air, even though the clock on the sign outside First National Bank, two blocks over, read eighty-two degrees.   It’s a beautiful day in Coles Creek! Come see our low interest rates!

Benjy didn’t notice the man in the grass beside him until they were almost on top of each other. He gasped—no f-bomb this time—as he hopped away from the stranger.

The man grunted. Benjy watched him reach down and pick up one of the dead birds with both hands. He didn’t have to bend far—his back was so hunched that his long arms almost dragged the grass. His hands twisted and Benjy heard a small crack, like an eggshell breaking. The man studied the severed head, now wedged between his meaty forefinger and his thumb, then dropped it into the canvas bag that lay beside him. Its body followed right after.

Those hands. They were stained a deep, purplish-red, from where his wrists protruded from his ragged coat all the way to the tips of his fingers. Benjy’s hands had looked similar after picking a bucket of blackberries the previous summer on his grandfather’s farm. That’s not berry juice, though, Benjy thought, shivering at the idea of those enormous hands wrapped around his own neck. Would my head pop off like that?

The man moved onto the next bird, then the next, twisting each head off as he went. Benjy felt the eggs he’d eaten at breakfast rising in his throat, but swallowed them again. He looked around desperately for help, but all of the adults were congregated on the other side of the park. Any of them would probably have ran and called the police, or possibly ignored the man (Benjy found adults were very good at ignoring things), but Benjy had not acquired either of those particular skills yet. He was only nine.

“Excuse me,” Benjy squeaked, but the man didn’t respond. “Excuse me!” Benjy called a bit louder.
The man paused, dropping his sack and slowly turning to face Benjy.

“You talkin’ to me, boy?” the man growled in a thick accent Benjy had never heard before. His voice was deep, like the bass speakers Benjy’s dad kept in their garage. And his eyes. They were tiny beads on his round head (like an insect’s, Benjy thought), almost hidden beneath the shelf of his brow which protruded out over the man’s face like a canopy.

“Y-yes. I was,” Benjy answered, summoning every bit of courage he possessed. “Why are you doing that to the birds? They didn’t do anything to you.”

The man lurched forward, his limp arms swinging inches from the grass, like prosthetics rather than natural appendages. And even though the man never looked at his feet, his steel-toed boots always landed in the shadows cast by the branches of the oak trees. The sun never shone on his face, either. He stopped several feet from Benjy.

“They’re bad.” The man grunted again and pointed at the bag. Benjy was glad he couldn’t see inside. When they’re bad, their heads come off.”

“Sometimes things just are. Born that way. Sometimes they turn. You could thread a needle with the difference. I’m just doing my job, boy.”

The man showed his hunched back to Benjy. “Some call me The Camel,” he said over his shoulder, then faced Benjy again. “Some call me a monster. But I’m really just a cleaner.”

“Aye, boy. I come when things go wrong. Clean up the messes.”

Benjy thought for a moment. “Only birds?”

Benjy had seen bad people on TV and in movies and knew that the cops usually took care of them. But he knew this was different.
“Is that why your hands are like that?” Benjy finally asked.

The man spread his red-stained fingers. “A long time behind me, a long time yet to go.” He turned around and starting picking up the pigeons again, twisting their heads off and tossing them into the bag.

“Wait!” Benjy shouted. The man looked over his shoulder. “Won’t the people see you?” Benjy gestured toward the other side of the park.

“I have my ways. People never see me. And if they do, they never tell.” His eyes squinted down to almost nothing. “They never, ever tell.”

Max Shephard is a Mississippi attorney, author, and entrepreneur. His stories have been featured on podcasts such as CreepyPod and Chilling Tales for Dark Nights, and he frequently contributes to Reddit’s NoSleep forum for original horror. One of these days, one of the stories he’s optioned might actually get made into a movie.