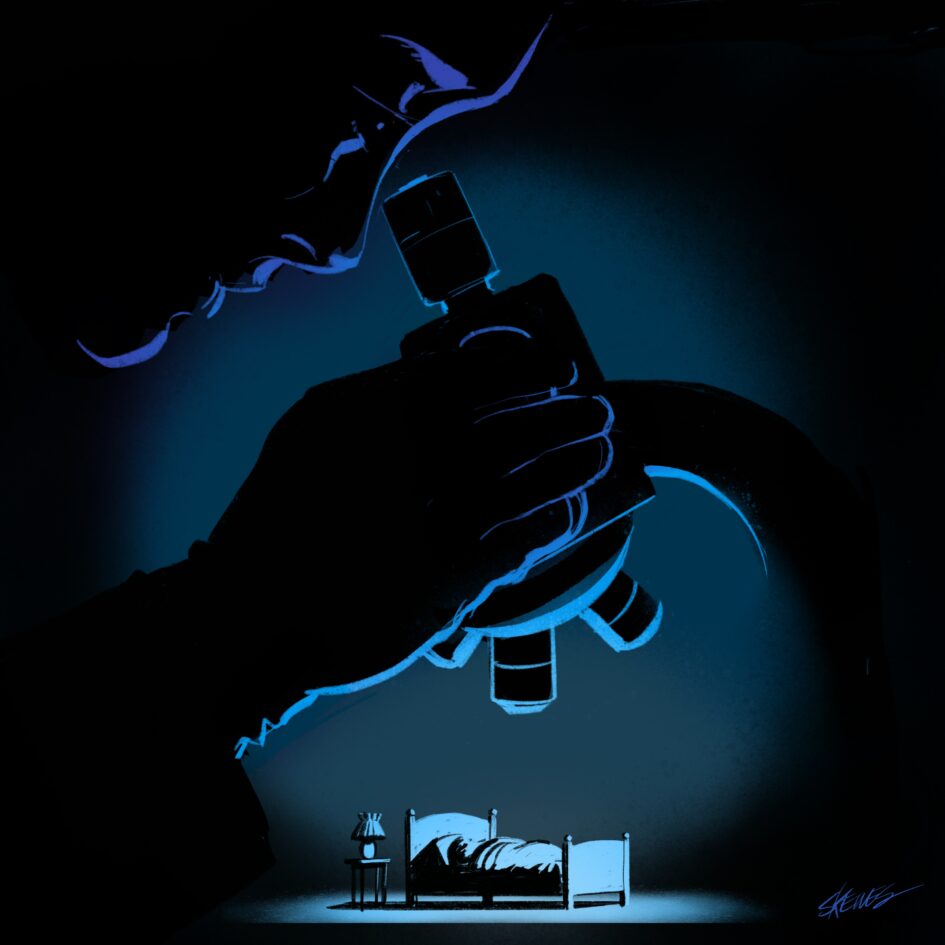 Sandy shores writhed with sharks the fishermen caught while wading out knee deep. I watched those sharks on that first beach vacation I took as a child: thin wisps, sharp forms, struggling to breathe. I thought they were beautiful as they drowned in salty air. I memorized their form, while caressing broken shells I’d gathered in a weighty bucket. My father, eyeing the sandy, stinking lot, convinced me to be more selective—to find the ones that weren’t broken. Together, we searched for a sand dollar, intact, whole. The tiny, mossy thing, with five fingers of leaves in the center, sits on my nightstand. When a sand dollar dies, the velvety spines underneath fall off. The rattling sound, when I shake it, comes from the remains of the sea urchin that once lived, its eating apparatus complex and dried up—shards of what it once was—encased in a smooth exterior.

Deep inside human skin, mites live and breathe—and mate. At night, they copulate while clinging onto hair follicles on human faces and eyelashes, nibbling on the sebum released by cells in pores. Moving between follicles, they find their mate and rest when the sun is up. My colleagues, who’ve studied them as well as I have, believe they have become so inbred that they will become one with humans and grow internally, rather than externally, which ultimately, I think, is rather lovely, yet sad. The inventor inside of me wants to push the edges.

I’ve never seen a face as perfect as Carlin’s. I saw it, among others, first, at a university café, and then again, at the bus stop. I moved between the lines on the sidewalk and street signs to take a closer look. Sharp features, with defined cheekbones—the kind of face that retains its structure through the cycles of elasticity—shrinking and pulling—the thickening and thinning of skin with age—sliced through the crowd. I’ve been married to that face for 20 years now, and when I close my eyes, each line cuts and edges its way into my brain, so that I’m still moving between those street signs, still stuck in that spot, reaching for the sharpest point to trace with my fingers.

In the lab, I put two specimens together: a male and a female mite. They mingle on a tissue of human skin, and under the microscope, they turn and coil around each other, diving deep, but my heart is heavy, if it’s true that they’ll become one with humans, so inbred that they no longer live externally. How much longer before they become nothing more than a strand of hair, rattling around inside a smooth case?

My colleagues laugh when I introduce new genetic strands to diversify the mites, to let them go on living as they’ve been living before. They say it will never work, but I wonder. I haven’t spent all my studies, laboring to discover what’s bound to happen, without intervening in some way. I move between the lines, like they do, searching for possibilities.

The shells in the bucket, from so many years ago, still slip through my memory, turning on their edges into gills that writhe. The gills become pointed noses and tails that impale themselves upon the lines, and the whole mass wriggles like worms.

At night, while Carlin is sleeping, I trace his cheekbones and the bridge of his nose. I softly run my fingers over his eyelids, wondering how many mites are nestled in his pores—and how many will cease to exist as they were. In the test tube, on the nightstand, I’ve let my mutations rest, but I suspect they’re eager to feast and move about in new territory. With tweezers, I remove them and place them on Carlin’s forehead. The room fills with the sound of his breathing: even, slow. The light of the moon seeps through the curtains, where the edges aren’t covered, and I see the sharpness of his face—his nose rising in a perfect peak, his cheeks smooth stripes.

Against the light of the moon, I see the outline of his face suddenly soften and sink. The breaths I hear are more like strangulations, clogged with saliva and mucous. When I turn on the lamp, I search for the face I’ve always known, but it’s crumbling beneath a writhing mass of multiplying mites, hungry for human flesh, churning through tissue and bone. My own breath catches in my throat when I realize they’ll wipe him clean, and I’ll be left with nothing more than a perfect shell that forever rattles its last breath.

Cecilia Kennedy (she/her) is a writer who taught English and Spanish in Ohio for 20 years before moving to Washington state with her family. Since 2017, she has published stories in international literary magazines and anthologies. Her work has appeared in MAUDLIN HOUSE, TINY MOLECULES, REJECTION LETTERS,KANDISHA PRESS, GHOST ORCHID PRESS, and others. You can follow her on Twitter (@ckennedyhola).