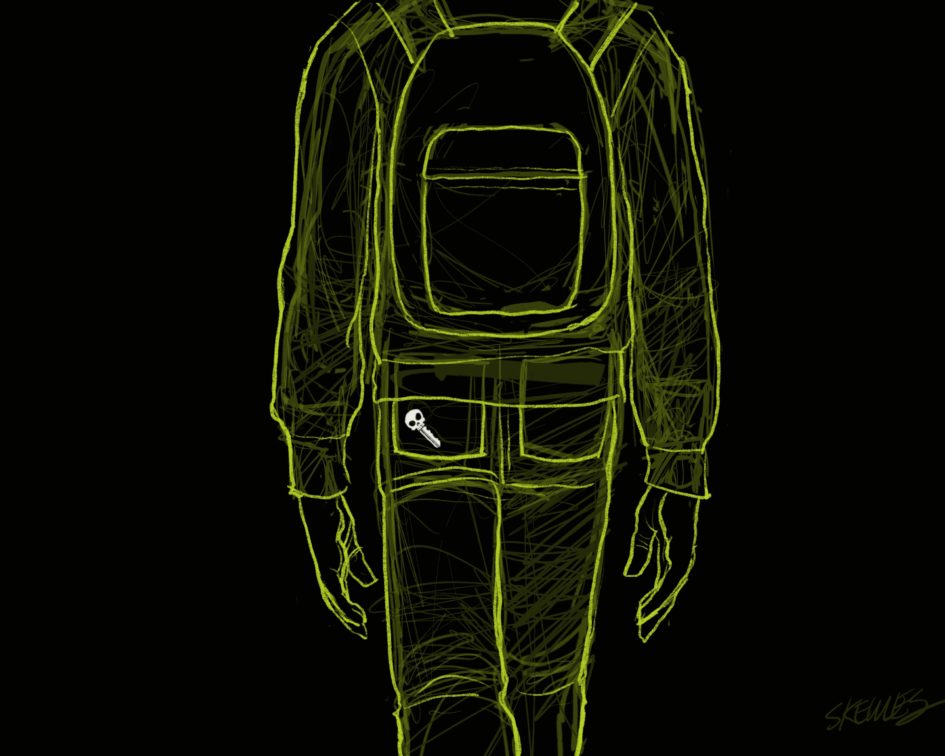 “Baggage may have shifted during the flight, please use caution when opening the overhead bins…”

The flight attendant’s muffled voice woke me from my two-hour slumber. Her lifeless speech droned on in the recesses of my mind as I rubbed my eyes and sat upright in my seat. The air in the cabin was thick and I choked back the urge to vomit as I drew back a huge, stale breath. My fingers drummed the armrest nervously as I impatiently awaited my turn to slip out of my seat and search the overhead bins for the green suitcase with the blue Eifel Tower tag.

When the chance finally presented itself, I ducked out of my seat into the aisle and opened the bin discovering the suitcase had shifted to the front of the compartment. After a quick glance over my left shoulder assured me no one was watching, I mumbled an aggravated “Excuse me.” towards a woman in a purple floral dress who was blocking the entire aisle and quickly snatched the green bag out of the bin. I pressed my body between the large woman and the seat making sure to keep the bag out of sight and quickly hurried off the plane undetected.

Another glance over my shoulder once I was in the terminal reassured me I had not been seen. I attempted to be as discreet as possible, despite my anxiety, as I pulled the suitcase behind me into the nearest restroom. Once safely inside an empty stall I took a few deep breaths before unzipping the suitcase. I laid the suitcase open on the bathroom floor and dropped to my knees as I frantically began searching for the key. A wave of alarm gripped my chest when I didn’t find it immediately. I dug my hands in between the neatly folded piles of clothes in desperation. I knew it was in here. I had watched them put it in this bag. What was I going to do if I couldn’t find it?

Panic. My hands burrowed farther into the bag and I began emptying the contents into a heap on the floor of the stall. My fingers found buttons, zippers, pockets. Nothing. Everything would be ruined. Panic. The skin on the back of my neck pricked and I could feel my face redden; my breathing become more shallow and rapid. I held my breath. Everything relied on me finding that key…

Sweat beaded on the bridge of my nose as I anxiously continued to search the bag. Finally, the touch of cold steel against the tip of my finger sent a wave of relief through my entire body. Exhale. My body began to shake and my legs were unsteady as I slid my back down the cinder block wall and sat down on the floor. Cradling my head in my hands, I tried to relax my trembling frame. After several deep breaths, my stomach quit turning. After a few more,  the pounding in my head and the shaking in my hands stopped. I stood up and carefully steadied myself as I shoved the key attached to an I Love San Francisco key chain deep into my left pocket.

I picked up a purple polo shirt from the top of the pile of clothes on the floor and wiped the sweat from the back of my neck before rolling it up and shoving it back into the suitcase with the rest of the clothes. I told myself I was ready. I was ready.

I knew I had lost precious time searching for the key. I hailed the nearest taxi and gave the cabbie the address.

“Headed home?” he asked, nodding towards the green suitcase as he took it from me and hurled it into the awaiting trunk.

“Kinda.” I replied and got inside the cab.

I wiped the remaining sweat from the back of my neck with my left hand and breathed deeply as I continued to try and relax. The fear I had experienced in the restroom was slowly being replaced with a feeling of sheer excitement. My veins felt like they were being filled with electricity that pulsed directly into my heart.

Elton John’s “Goodbye Yellow Brick Road” hummed quietly in the background as the taxi heaved down the freeway and I leaned back and closed my eyes. It seemed like hours had passed before the taxi took a sharp left turn and slowly began ascending an unmarked gravel road. I wondered if I had fallen asleep. I opened the window a crack and took a deep breath of the crisp February air. A few minutes later, the taxi stopped in front of a run-down motel perched precariously on the hill.

“This is it.” The driver said as he skeptically glanced at the heap of a building and pointed to the meter. “$32.86.” He shoved his right hand in between the glass and quickly grabbed the $40 I handed him.

“Keep it.” I said and waved my left hand toward the few singles he offered me. I got out of the cab and met him at the open trunk. He yanked out the green suitcase and set it down on the gravel road.

“You staying here?” He scoffed looking at both me and the motel suspiciously.

“Yep.” I said looking away. “Just uh…waiting for my wife to get here.” I glanced at my watch and bent down to pick up the suitcase, “She should be here soon…”. my voice trailed off as I heard the cab’s engine start up again and realized he was no longer standing next to me.

The motel looked awful. There was no way the cabbie believed I was staying here. This caused my anxiety to resurface. I had intended to remain inconspicuous, and yet here I was standing in front of the most conspicuous motel within a 500-mile radius. All the windows were broken and the ground was peppered with the remains of the motel’s green siding. The roof was worn and sagging; holes scattered across it lending themselves as convenient doorways for the nocturnal creatures that certainly called the attic home.

A single, exhausted, yellowing lawn chair sat on the porch next to an old payphone. Half of a cement bird bath remained in the small patch of grass that may have at one time sprawled the property. I exhaled a small sigh of relief and smiled to myself as the taxi drove out of sight. It didn’t really matter if he believed me I thought, comforting my insecurities. It was irrelevant truthfully, as I wouldn’t be here much longer…and with that thought, again, a surge of pure excitement flooded my veins.  It was getting dark; I didn’t have much time. I looked up towards the hill and began walking.

I followed the winding gravel road uphill for at least three miles. Dusk was beginning to settle in and the faint howl of coyotes in the distance sent a brief chill up my spine. I stopped a few times imagining I heard one emerging from the dense forest that licked at my eels, eager to attack, but assured myself it was simply the sound of my own shoes on the gravel road.

Exhilaration swelled in my chest as I continued up the hill and recalled our conversation. The brief dialogue we had exchanged in the airport terminal a mere 12 hours ago would be easily dismissed as “chit chat”, “idle prattle” and merely “unimportant”: “How’s the weather back home?” “How long were you away?” “Have you been here before?” They would never understand the paramount significance of that conversation, how integral to my plan that brief exchange had been.

After what seemed like hours, I could see a red, brick chimney poking out between two giant pine trees in the distance. As I rounded the final steps up to the driveway, a beautiful blue house with a white door slowly emerged from the evening. I looked over my left shoulder again, mostly out of habit at this point, as I approached the front door. I confirmed the address with the tag on the suitcase again and smiled. My heart beat faster. The brown weathered doormat on the porch said Welcome. I had never felt so welcome anywhere in my entire life. I reached into my left pocket for the key and my heart soared as the cold steel touched my finger once again. The lock tumbled effortlessly in the door with a soft click.

The door creaked faintly as it swung open revealing an ordinary yet beautiful entryway. A small wooden bench and coat rack were near the door offering a weary traveler a seat and place to hang his coat. Today I was that traveler. I hung my coat, set the suitcase down in the center of the foyer and shut the door. The house was completely dark except for a single light flickering in the distance. I quietly felt my way through the dark living room following the flickering light into the kitchen.  I spotted a photo of the couple held onto the refrigerator with an I love Las Vegas magnet. I snatched the photo from its place on the fridge, kissed the beaming faces of the couple and jammed it into my back pocket.

After I helped myself to a partially bruised apple out of the blue ceramic fruit bowl on the counter, I rummaged through all the drawers and cabinets in the kitchen. My search yielded most everything I would need: scissors, twine, duct tape and a small eyeglass screwdriver.

Then I turned my attention to the glorious, enormous block of knives sitting on the counter. My heart skipped a beat. My head buzzed and my palms began to sweat. I greedily seized the entire block along with the other items and felt my way back into the dark living room. A maniacal smile on my face was impossible to remove. A vile laugh escaped my lips as I laid out the supplies on the plush beige carpet in anticipation of their arrival. I took the picture of the couple out of my back pocket, made myself comfortable in an overstuffed pink floral chair in the corner and waited.