NO RIGHT TURN ON RED 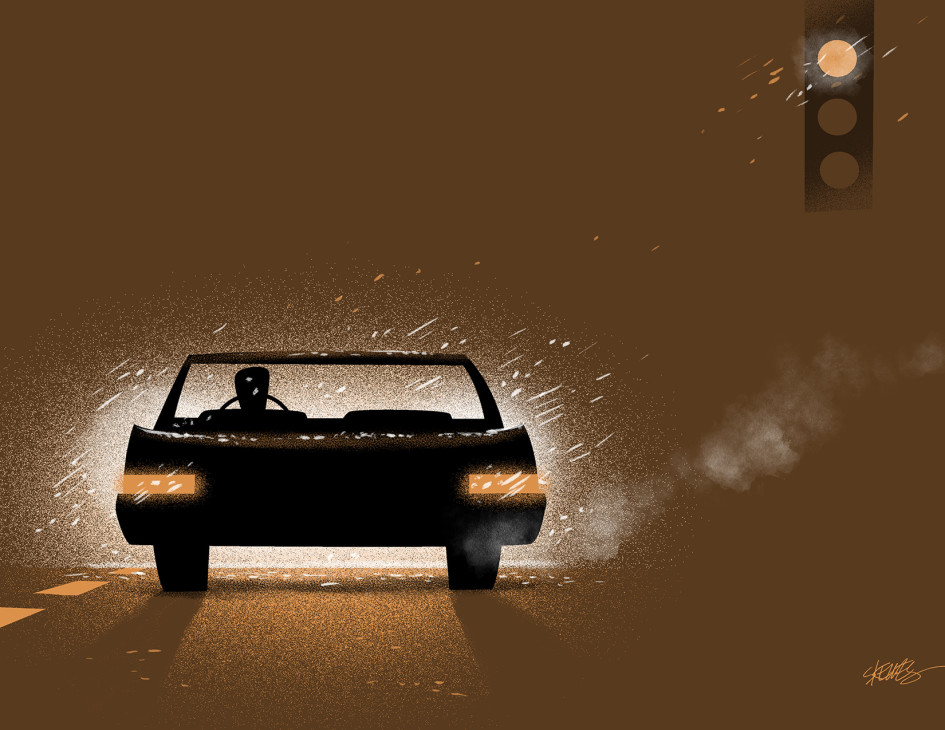 It was well past midnight as I drove home from my new job. The pay wasn’t so good, and it was far from home, but I really had no choice considering I was behind on rent.

Exhausted from working a long first day, I just wanted to get home and sleep. I thought I knew the way back, but I had arrived during daylight hours when it was easier to manage my new surroundings. Street lights were scarce, which I hadn’t noticed in the afternoon. And to make matters worse, it was snowing. Somewhere along the way I must have taken a wrong turn, and soon I was completely lost.

After driving aimlessly through unfamiliar neighborhoods, I finally came to a traffic light. I was relieved, as it meant the highway was nearby. I was almost positive it was to the right but the light was red. A sign on the corner stated: NO RIGHT TURN ON RED. Who was I to argue with all capital letters? Yet, it was so late that none of the houses I passed had lights on, and there were no cars around. Surely, it was okay to make a right turn.

“Screw it,” I said, and stepped on the gas. Halfway through the turn, something darted out into the intersection. A loud, dull thud echoed through the car, and I slammed on the brakes. At first, I didn’t react. I just shut off the engine and sat there, hoping it was an animal.

Once the initial shock wore off, my hope turned to assumption. I exited the car with my fingers crossed and my breath held. As I rounded the front of the vehicle, I saw the legs of a child. My heart sank into my stomach and I fell to my knees, sick and ashamed.

I stood up, but not straight, and walked closer to the child. It was a girl, possibly around eight years old. She had a little blue backpack, and must have been holding a sleeping bag that was now lying unraveled a few feet away. She lay face down, her blonde hair covered in dark red blood. One by one, delicate snowflakes touched down upon her lifeless body. In the headlights, she resembled some kind of fallen angel. I felt I was being taught a lesson and a harsh one at that.

I returned to the car and dialed 911. As I waited for help to arrive, I went over the incident in my head. Though it was a minor violation, I knew I couldn’t tell them I made an illegal right turn. Especially when it resulted in such a tragedy. As far as anyone was concerned, the light was green.

The police arrived with an ambulance, and I went to greet them. When I tried to show them the girl, she had disappeared. There wasn’t even blood on the ground, or an imprint in the snow.

“You say you hit someone and they were right here?”

“Yes, I saw them! It was a little girl! I swear to God!” I had no idea where she had gone, or why there was no evidence that anyone was hit by a car. I probably seemed crazy.

“Well, they must have run off. You checked to make sure she wasn’t breathing?”

“Um… no. I- I saw the blood, and she wasn’t moving. I was in shock,” I replied, feeling like a complete idiot. Of course I should have checked, but I was too busy figuring how to cover my own ass. To say it was embarrassing wouldn’t do it justice.

“You were going pretty slow. Chances are she was just stunned. We’ll search the area. She couldn’t have gotten far. Just sit tight and we’ll find her.”

I sat in silence while they scoured the area for the little girl. Somehow I knew they wouldn’t find her, as there were no footprints. My eyelids were getting heavy, and I kept seeing flashes of the girl’s body whenever I would drift off for a moment. With each vision, her face gradually turned towards me, her eyes full of sorrow and anger.

Just as I was falling asleep, there was a knock on my car window. They hadn’t found any sign of the girl, but they’d let me know if anything was reported. It was somewhat of a relief, and yet equally unsatisfying. The whole way home I drove under the speed limit, stopping at every intersection even when the light was green. I didn’t get much sleep that night.

The next day I wasn’t thrilled about going to work, but as a new employee, I really had no choice. As ridiculous as it sounds, I got lost again on the way home. I had meant to print out some reverse directions but was too preoccupied with the events of the previous evening. Once again, I drove through parts unknown and eventually came to a red light.

“Is this the same intersection?” I asked myself. At the time, I wasn’t sure, but it did have the same sign: NO RIGHT TURN ON RED. I was correct about the highway being to the right, so I knew I was going to have to make the turn. This time, I would wait until the light changed.

I’m not sure how much time passed, but it must have been at least twenty minutes. The clock on my phone had stopped at 12:47, so I wasn’t sure. For a while I just stared at the words, “NO RIGHT TURN ON RED,” contemplating why they were mocking me. The light wasn’t changing, and my patience was fading.

“Are you kidding me?” I protested. I didn’t want to do it, but there wasn’t much of a choice. This time I turned very slowly, and looked around to make sure no one was there. I thought it was all clear when, just as the night before, something darted out in front of the car.

“Shit!” I shouted, slamming on the brakes. “This can’t be happening!”

I jumped out of the car and rushed to inspect the body. My jaw dropped when I realized it was that same girl. She had the same little blue backpack. The same sleeping bag was lying unraveled just a few feet away, and her blonde hair was stained with dark red blood. I didn’t know what to think. My mind went completely blank while I stared at the horrific scene. Whether it was real or not, it was far worse the second time.

I retreated to my car again, but this time I hesitated to call the police. Then I remembered what the officer had said about making sure she was dead. I went back to check, but she was gone.

My third day at work was painful. I couldn’t concentrate under the circumstances, and no one was going to understand or be sympathetic. Different scenarios kept playing out in my head. I imagined a little girl going to a slumber party. She’s having fun with her friends, until they play a cruel prank on her. She calls her mother in tears, but her mother says she’s too tired to pick her up, and that she must walk home. On the way, I hit her with my car. That was just one of the scenarios, but it seemed the most plausible. I started to think she could be a ghost who had already been struck by someone else’s car. Perhaps it was a hit-and-run and now she needed someone to find out who killed her, but why me?

When my shift ended, I was reluctant to leave. After driving to work a few times I had finally memorized the way home, but I was still afraid of that intersection; that sign. I drove cautiously, with eagle eyes, and eventually merged onto the highway; invoking a collective sigh of relief from every cell in my body. I smiled and turned up the radio as I accelerated past the speed limit.

It seemed to be taking quite a while to reach my exit, but I was too tired to find it suspicious. My eyelids were getting heavy, and for a moment I almost fell asleep. As I took an extended blink, I was suddenly somewhere else. The highway was gone, and in front of me was an intersection with a red light. A sign on the corner persisted: NO RIGHT TURN ON RED.

“What the…” I looked around in disbelief. It was that same intersection. How I got there was completely beyond my understanding. Was some otherworldly force trying to tell me something? Was it my destiny to help this little girl? All I wanted to do was go home. This time I would wait until the light turned green, if I had to wait all night.

I think I sat there for a few hours, but my phone had stopped at 12:47 again. Perhaps the little girl died at that time. The light was still red, and I knew it was never going to change. Something was reaching out to me for help, but I didn’t care. All I wanted to do was go home.

I shouted at the traffic light, “Just change already, asshole!” as if it would be intimidated. As I became more irate, and delusional, the thought of killing the little girl a third time became almost desirable, but then I remembered how I felt each time. I knew she couldn’t be real, but the experience was just as real as anything. I shook the notion and put my hands firmly on the wheel. I couldn’t sit there forever, so there was only one thing to do.

Written by Umbrello , posted on Creepasta.wiki
Content is available under CC BY-SA